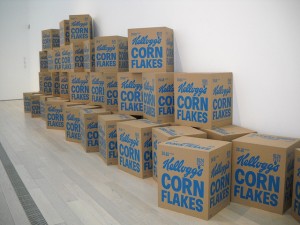 Throughout history, there have been many products that didn’t survive the Darwinian test.

But, those that have survived have helped launch careers and built companies.

Many of these companies have an interesting story to tell.

For example, did you know that some of the most beloved breakfast cereals can trace their history to the Battle Creek Sanitarium or that a housewife and mother of a seven-month-old child convinced her husband to launch one of the most successful baby food brands in the world? How about the fact that an unusually large order for milkshake-mixers led to the later success of one of the world’s most popular fast food restaurants or that the founder of one of America’s favorite fried chicken restaurants was really a colonel?

These and other stories are documented in the book, “Symbols of America: A Lavish Celebration of America’s Best Loved Trademarks and the Products They Symbolize, Their History, Folklore, and Enduring Mystique,” by Hal Morgan.

Dr. John Harvey Kellogg and the Road to Wellville

In the 1890’s, Battle Creek was the headquarters of the Seventh Day Adventist Church. It was from their belief in vegetarianism and healthful eating that led to the inventions of some of world’s favorite breakfast cereals.

During this time, Dr. John Harvey Kellogg, one of the Adventists’ staunchest supporters of healthful eating habits, ran the Battle Creek Sanitarium.

According to Morgan’s book, “Kellogg’s patients at the sanitarium lived on a diet of nuts and grains, often prepared from recipes created in the hospital’s experimental kitchen. Dr. Kellogg’s early food innovations included meat and butter substitutes such as Protose, Nuttose, and Nuttolene, as well as foods that have better stood the test of time, like granola, first made at the sanitarium in 1877. Patients were not allowed to drink tea or coffee, but received instead the home-brewed Caramel Coffee, made from bran, molasses, and burnt bread crusts.”

While Dr. Kellogg was more interested in promoting healthful eating, it was his brother, W.K. Kellogg, who saw the potential for a new business venture in the foods that were being made at the sanitarium. In particular, he focused on the flaked cereal that they had invented in 1894.

At first, the brothers started selling the cereal as Sanitas corn flakes to patients who had left the sanitarium and wanted to continue the healthy diet prescribed by Dr. Kellogg.

However, in 1903, W.K. Kellogg set out on his own to promote the cereal to a broader market. In the process, he changed the name to Kellogg’s toasted corn flakes and added malt, sugar and salt to improve the flavor—something his brother had opposed as unhealthy.

In 1906 W.K. Kellogg officially opened the Battle Creek Toasted Corn Flake Company. Its name was later changed to The Kellogg Company and the rest is history.

On a side note, after his second nervous breakdown, C.W. Post found himself under the care of Dr. Kellogg at the Battle Creek Sanitarium. It was there that he was inspired to start his own breakfast cereal company, the Postum Cereal Company, now known as Post Holdings. Some of his early products included Postum Cereal beverage and, the better known, Grape Nuts cereal.

The novel is a historical fictionalization of Dr. John Harvey Kellogg’s work at the Battlecreek Sanitarium.

The Birth of Gerber

According to Morgan, “It took a mother to come up with the idea for commercially processed baby food—a mother with connections at the Fremont Canning Company, of Fremont, Michigan. Dorothy Gerber was straining peas for her seven-month-old daughter, Sally, one Sunday afternoon in 1927 when she asked her husband why the job couldn’t be done at his canning plant. “To press the point,” she recalled, “I dumped a whole container of peas into a strainer and bowl, placed them in Dan’s lap, and asked him to see how he’d like to do that three times a day, seven days a week.” The following day Dan dutifully asked his father if the baby’s vegetables couldn’t be strained at the cannery. Their tests proved it could be done, and by the fall of 1928 the first Gerber strained baby foods were on the market—carrots, peas, prunes, spinach, and vegetable soup.”

It is important to remember that even the largest brands in the world started out as fledgling companies founded on a hope and a dream.

As shown in the accounts of the origins of Kellogg’s and Post cereals, as well as the Gerber Products Company, many success stories are interesting stories. (Hint: This can be used in your content marketing efforts.)

As for the other two companies that I alluded to earlier, I’m sure that you guessed that I was referring to the McDonald’s and Kentucky Fried Chicken restaurant chains. Their stories might be good topics for future posts.

However, if you don’t want to wait, you might want to pick up a copy of the book. It was published in 1987, but you can still purchase it on Amazon.com. You might also be able to find a copy at your local library.

It’s an interesting read; I’d recommend that you check it out.

Note: This post was originally published on HubPages in October of 2012. I removed it from HubPages in November of 2016.