In Retail, the Best Price Is Not Always the Lowest 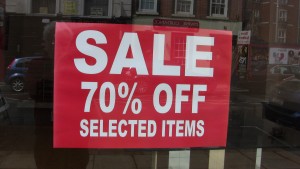 Whether in a brick-and-mortar retail store or on a retailer’s website, the price charged for the products or services sold will have an effect on sales.

However, sometimes the retailer with the lowest price around won’t have the highest conversion rates.

This post is intended to highlight some of the ways that price influences purchase decisions in the real world.

If you took an introduction to economics class in college, you are probably familiar with the law of supply and demand. It basically asserts that, if everything else remains the same, as the price of a product decreases, the demand for the product will generally increase.

However, in the real world, this relationship does not always prove to be true.

The reason for this can be explained by a theory developed by Dr. Daniel Kahneman and Dr. Amos Tversky.

According to Wikipedia, “Prospect Theory is a behavioral economic theory that describes the way people choose between probabilistic alternatives that involve risk, where the probabilities of outcomes are known. The theory states that people make decisions based on the potential value of losses and gains rather than the final outcome, and that people evaluate these losses and gains using certain heuristics. The model is descriptive: it tries to model real-life choices, rather than optimal decisions, as normative models do.”

As several experts have pointed out, this plays out each and every day in the retail world.

Consumers Will Pay Full Price for Some Brands

As you know, there are a few brands that have established enough brand equity that people are willing to pay higher prices for the products and services that they sell.

Often this means that retailers can sell these products to customers at full price.

And, in some cases, even the sale prices for these items are higher than the full price of some of the less expensive alternatives.

As I will explain later in the post, these products are extremely important to retailers for many reasons.

The Power of a Sale

As explained in the book, Dr. Anderson and Dr. Simister partnered with a company that sends clothing catalogs to people all over the United States.

To test the power of a sale, they send two versions of the catalog to people all over the country.

In one version, they listed a specific product at full price and in the other they said the product was part of the “Pre-Season SALE.”

However, in reality, the price was exactly same in both versions of the catalog.

The only difference was that in one version it was listed as a sale price and in the other it was not.

In the end, they found that just by saying the product was on sale increased sales by more than 50 percent!

The Size of the Discount Matters

In “Contagious: Why Things Catch On,” Dr. Berger uses an example of two stores selling the same grill to illustrate how the size of the discount can be more important than the final price that the item is sold for.

As he explains, the store in scenario A lists the original price of the grill as $350, but sells it at a sale price of $250.

On the other hand, the store in scenario B lists the same grill at an original price of $255, but sells it at a sale price of $240.

However, remember that in each case the grill is exactly the same, but the final price in the second scenario is actually less than the first.

In this case, it was the size of the discount, not the actual final price that got people to say that they would make a purchase!

How the Discount Is Stated Matters (The Rule of 100)

In the book, Dr. Berger also highlights the fact that the original price will determine whether to list a sale in terms of a percentage off or an actual dollar value.

“Researchers find that whether a discount seems larger as money or percentage off depends on the original price,” writes Dr. Berger. “For low-priced products, like books or groceries, price reductions seem more significant when they are framed in percentage terms. Twenty percent off that $25 shirt seems like a better deal than $5 off. For high-priced products, however, the opposite is true. For things like laptops or other big-ticket items, framing price reductions in dollar terms (rather than percentage terms) makes them seem like a better offer. The laptop seems like a better deal when it is $200 off rather than 10 percent off.”

Dr. Berger goes on to explain that a good rule to follow is that if the product’s price is less than $100, then a percentage discount seems like a better deal. On the other hand, if the price of the product is more than $100, a discount expressed in the number of dollars off is a better way to go.

Remember those full-priced items that I mentioned earlier in the post.

The fact that a store sells them can actually help increase the sales of the mid-range items that it sells.

In “Brainfluence: 100 Ways to Persuade and Convince Consumers with Neuromarketing,” Roger Dooley highlights the fact that selling high-end items increases the likelihood that people will buy products that are considered the next best option.

As Dooley points out, “A Standford University experiment had a group of consumers choose between two cameras, one more full-featured than the other. A second group chose from a selection of three cameras, which had the other two cameras plus one even higher-end model.”

“The first group split their purchase about 50/50 between the two models,” writes Dooley. “But, in the second group, fewer of the cheapest unit sold while more of the second camera sold. Adding the very expensive model made the second camera look like a reasonable compromise.”

Therefore, adding high-end items that sell at full-price can be a good choice for retailers. If the full-price items sell… great. But, if not, they might help increase the sales of the mid-level products sold at the retail store.

Keep in mind, this only works if customers see all the options available to them.

Therefore, it is not surprising that in many brick-and-mortar retail stores, people have to walk past the really high-priced items to get to the other options available to them. This makes the other items seem like a bargain in comparison.

A similar thing could be done on a website by listing other options available when customers search for specific products. The great part of an online store is that retailers can easily do A/B tests to see what website design converts the best.

In his book, Dr. Berger explains how the price of products and services influence sales. His book includes an explanation of Prospect Theory and how it can be used to explain why the store that sells a product at the lowest price doesn’t always sell it at a higher rate than other retailers in the area.

Both books offer lessons that retailers can use both in their brick-and-mortar stores and online.

In the end, it is important to keep in mind that people don’t always act the way that we would predict that they would.

Therefore, we need to test different options in an effort to find the underlying reasons why people do or do not buy products.

This will allow retailers to modify the shopping environment in an effort to increase the number of conversions and ultimately improve the bottom line.