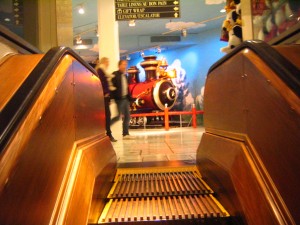 Macy’s is once again leading the charge into the future of retail.

Earlier this year, Macy’s announced that it was expanding its use of item-level RFID technology to increase the accuracy of its inventory management system, thus making it easier for the retailer to sell more items both in its brick-and-mortar stores and online.

Recently, Macy’s announced that it is also experimenting with Artificial Intelligence (AI) in an online mobile web tool.

However, if you look at them more closely, Macy’s is laying the groundwork for something much bigger.

While the retailer most likely has a long-term vision, it looks like the it is starting out with few expectations and is willing to let customers guide their future decisions.

As an article in the Washington Post points out, “Macy’s announced Wednesday that it has teamed up with IBM Watson to use artificial intelligence as a customer service tool in 10 of its stores.  The retailer dubbed the pilot program “Macy’s On Call,” and it will allow customers to type in questions on their phones and receive answers. Unlike some chatbots that can only regurgitate preprogrammed responses based on keywords, IBM Watson will learn over time to give better answers that are customized to individual stores.”

The article states that the retailer is expecting customers to ask where specific merchandise is located, where to find the restrooms, and other similar questions.

However, customers inevitably will ask tougher questions than that.

And, if the AI works as some people hope, the app will give the retailer a way to offer customers a recommendation engine that will help them make purchase decisions and offer additional product suggestions in the same way that Amazon already does.

In fact, other retailers have already started to use AI in this way.

“Macy’s is not the only retailer that is experimenting with some use of artificial intelligence,” Sarah Halzack points out in the Washington Post article. “IBM Watson has already dabbled in using its tools to power other shopping experiences such as a collaboration with outdoor apparel brand North Face on a website that helps shoppers find the right jacket. Users can type in natural-language answers to a host of questions, including “Where and when will you be using this jacket?” and “What activity will you be doing?” Based on the customer’s answers, IBM Watson will serve up some suggested outerwear.”

The Importance of an Accurate Inventory Management System

As I mentioned earlier, in January Macy’s announced its “Pick to the Last Unit” program for fulfillment of customer purchases.

This initiative uses item-level RFID technology to ensure that the retailer’s inventory is extremely accurate.

While the store hasn’t suggested that the new AI fueled “Macy’s on Call” mobile web tool will be tied to the inventory management system, this would be the logical next step.

If combined, sometime in the not so distant future when a customer asks to receive style advice using the new mobile web tool, he or she would not only receive recommendations based on the items that the retailer has for sale, but would also get information about whether or not the products are available at a particular location, at a nearby Macy’s, or if they are only available online.

These are things that sales associates can usually provide. However, when this information is provided to customers on their smartphone, it could save them a lot of time and lead to increased customer satisfaction and more sales.

And, given the fact that the mobile web tool could be used anywhere, this could be another way for Macy’s to capture sales that might end up going to a competitor.

Again, as far as I know, Macy’s hasn’t announced that the mobile web tool will be able to provide this sort of information. However, they already do offer customers the option to buy some items online or in app, and pick up them up in store.

While integrating the inventory management system with the AI mobile web tool might not seem like a big deal, I think a seemless integration of the possible AI recommendations and the ability to tell customers exactly where to find the items it recommends is extremely important.

Hopefully, this is something that Macy’s is planning. I also hope other retailers try similar things.

Some people wonder why Macy’s is investing in AI when they could have their store associates answer these questions.

And, the reality is that they already do.

However, as studies have shown, many people would prefer to look the information up on their smartphone rather than interact with a sales associate.

This doesn’t mean that the smartphone will replace all store associates, as some people still prefer to have a one-on-one interaction with a real human being. (Note: There is a grocery store in Sweden that has eliminated the need for customer service staff. However, this probably won’t be a common practice for the foreseeable future.)

Furthermore, having sales staff on the sales floor not only helps the store provide better customer service, but they also help decrease theft at the store.

That said, the real reason that Macy’s is experimenting with AI probably has to do with choice.

As Jeff Hasen, founder of Gotta Mobilize, often points out, giving customers the ability to shop and find information in the way that they want to is extremely important.

What it will do is provide customers who want to find information on their smartphones the ability to do so.

And, choice is good.

Therefore, Macy’s is smart to experiment with AI.

In the beginning, there is a good chance that it will be a little bit clunky. However, if the AI learns as experts say it will, the app will get better and more useful as time goes on.

As I also pointed out, the fact that Macy’s has already improved the accuracy of its inventory management system is important.

After all, what good are product recommendations if customer are disappointed each time they go to the specific department to find the item that was suggested only to find that it is out of stock.

Keep in mind, although several articles have suggested it, it is not clear if Macy’s plans to use AI in the specific way that I am suggesting. However, other retailers have started to experiment with AI in this way, and it would be the logical next step in an effort to compete with competitors both large and small, including Amazon.

If you look at it closely, Macy’s is slowly adding new uses of technology in an effort to help improve the shopping experience it offers its customers.

Each new improvement that the retailer makes brings us closer to a retail shopping experience that would have been considered science fiction only a few years ago.