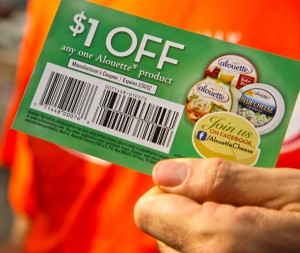 There is a lot of evidence out there that coupons help drive sales.

This is partially due to the fact that customers like coupons.

In fact, I’d even go as far as to say that customers love coupons. They love to receive them and the love to use them.

This is supported by a 2014 study that was conducted by Forrester Research on behalf of RetailMeNot.

And, while the percentages vary, most sources indicate that nearly all consumers will use coupons at least once in a while.

Furthermore, according to a press release found on Quotient.com, research conducted by GfK on behalf of Coupons.com found that, “heavy digital coupon users shop 47 percent more often than the average shopper, spending $6,081 annually on groceries and household goods alone — an incredible 114 percent more than the national average.”

Research has even found that coupons make customers happier.

However, while customers do love coupons and even expect retailers to offer them, there is one aspect of a coupon that can provoke ire in even the most loyal customer.

It’s in the Fine Print

If you ask any retail employee, they could no doubt list a countless number of times when customers were happy with the savings that coupons provide.

On the other hand, they could also point out the many times when customers left dissatisfied with the store because they found out that the items that they intended to purchase were excluded. And, the only way to find that out was to read the fine print. Which, by the way, they probably didn’t do, so they brought the items to the register and were forced to pay full price or abandon the purchase.

Matt Brownell, consumer and retail reporter for DailyFinance.com, summarized the frustrations that many consumers have in a 2013 post.

In the post, he states, “When retailers run sales and coupons, they include fine print that limits what the deal actually applies to. In most cases, it’s relatively harmless — it defines the effective dates of the promotion, and may exclude select items like gift cards and jewelry.”

“But problems arise when retailers go totally overboard and try to exclude half the store,” he continues. “Department stores like Sears (SHLD) and Macy’s (M) tend to hold sales that exclude dozens of brands from the discount, and earlier this year Guitar Center took some heat for a coupon that excluded more than 300 brands.”

He goes on to say, “Sure, in a perfect world everyone would read and understand the fine print. But it’s not unreasonable for someone to see ‘20 percent off everything’ and assume that it applies to most of the merchandise in the store.”

And, he’s not the only one to point this out.

Here are some of the tweets that I found posted on Twitter in the last few months.

Was excited to use my coupon till I read the fine print.. well crap! What’s left the bargain bin? @ultabeauty pic.twitter.com/vxGVUzzzN5 — VictoryVintageb (@Victoryvintageb) April 16, 2016

@REI can’t believe GPS items not couponable not like REI to make me read fine print. So disappointed. Was ready to use dividend plus coupon — burtrosen (@burtrosen) April 2, 2016

Ha! Harbor Freight’s “20% Off Super Coupon” isn’t so super. The fine print excludes just about every expensive item they have… — Fringe (@FringeSabrekat) January 31, 2016

If you need something lengthy to read, and you’ve already read War and Peace, try the fine print on a Harbor Freight coupon. — rodney grim (@rodneygrim) January 23, 2016

It’s a bummer when you receive a 30% off coupon but the fine print excludes sale items and everything you need is on sale that week 😧 — Rebekah Rutt (@BeknJ) November 24, 2015

Whenever City Sports would send a coupon around, there’d be fine print excluding like 95% of brands in the store. — Elizabeth A. (@joyfulanarchist) November 5, 2015

@JaimeVogt Apologies for the inconvenience—vendors and manufacturers often put limits on what our coupons can or cannot be used for. — Macy’s (@Macys) October 24, 2015

@c0uture We appreciate your feedback! Could you please email social@bloomingdales.com with which brands you’d like to see discounted? — Bloomingdale’s (@Bloomingdales) August 5, 2015

If these people got mad enough to vent their frustration on Twitter, it is more than likely that there are countless others who just walk away feeling a little less satisfied with the store.

Some businesses have acknowledged the frustration that customers have with the fine print by adding a little humor.

It’s Not Always the Retailer that Is to Blame

A 2015 article by John Matarese for WCPO in Cincinnati also highlights the frustrations that consumers can experience when trying to use coupons.

As he points out in the article, “Perhaps it would be easiest if the coupons simply listed the brands where you can use them.”

However, he also lets retailers, in this case Dick’s Sporting Goods, defend themselves.

According the article, Dicks explained that “manufacturers, not the store, make the rules, and typically do not allow markdowns on current season merchandise.”

Nevertheless, most customers don’t know this and it is the retailer, not the brand, that often takes the hit in customer satisfaction, trust, and brand loyalty.

Research has shown that not only do they drive sales and lead to increased brand loyalty, but they could also lead to future sales for full-price items. Researchers have also found that customers who are heavy digital coupon users shop more than the average shopper does.

Therefore, there is no question that coupons are good for business.

However, retailers need to keep in mind that when they offer a coupon that excludes too many of the brands that shoppers really want, it can backfire and actually harm the store’s reputation.