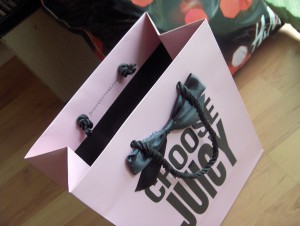 People love to shop and they love to let people know about it.

Therefore, it’s not surprising that for many years luxury retailers have given their customers the ability to let their friends, neighbors, and just about anyone else know that they have just spent some of their hard-earned money by providing trendy shopping bags to carry proudly as they walk through a busy mall or city street.

As Maggie Lange pointed out in a 2013 article on The Cut, “The shopping bag isn’t just utilitarian, it’s symbolic of taste, preferences, and pursuits. In his book Living It Up, author James Twitchell compares people holding shopping bags to “the powder on the heinies of migrating bees as they moved from hive to hive.” It’s a souvenir of where you went and a glossy declaration of conspicuous consumption.”

The Shopping Bag Should Reflect the Brand’s Image

In a 2011 Luxury Daily post, Kayla Hutzler highlights the fact that luxury shopping bags are visible to many consumers and therefore should positively convey the image and feel of the brand.

As Chris Turbyfill, executive vice president of sales and marketing at Design Packaging, is quoted as saying, “That bag reminds consumers of the brand and [therefore] it should look like the store. It is all involved in what we call the customer experience.”

“That bag needs to reflect the imagery and feel of the brand,” says Turbyfill. “And when consumers go home and put the bag on the table, it is a subtle reminder of what happened in the store.”

The post goes on to point out that the shopping bag can be seen by many people as customers walk around in public, particularly in major metropolises.

However, the post doesn’t mention another role that the shopping bag can play.

Use the Shopping Bag to Get Included

As Juliet Carnoy, Marketing Manager at Pixlee, writes in a post on the Pixlee blog, “Customer photos of your products are the purest form of earned media. When a customer posts a post-purchase photo of your product on social media, it’s a 5-star visual review of your brand.”

For the brands that make the products, this is great.

However, the retailer that sold the products might get left out if they don’t give the customer some way to visually represent the store in the photo. This is where a visually appealing shopping bag can play the role of photo prop and help get the retailer included in the story.

When a photo of the shopping bag is posted on social networking sites, it will not only be seen by all the people that that customer passes on the way home from the store, it could potentially be seen by thousands of people online.

About two weeks ago, I visited the local Verizon Wireless store with the intent of renewing my contract and purchasing a new smartphone.

The phone that I was looking for was actually sold out at the local store. Instead of waiting for the next shipment, I drove to the nearest store that had one available.

The customer service at both Verizon Wireless stores that I visited was excellent, and I walked out of the second store with a new Samsung Galaxy S7 Edge.

In keeping with the current trend, I prepared to take a photo of my purchase so that I could post it on Instagram.

This could have just been a photo of my new smartphone.

However, Verizon Wireless had just given me this beautiful shopping bag with the purchase that just begged to be included in the photo. So, I did just that.

In my opinion, that was brilliant.

Sometimes, it is the smallest details that can help get customers to mention and indirectly endorse brands on social networking sites.

And, as study after study has shown, consumers trust recommendations from people they know more than other traditional advertising methods that brands have relied on in the past.

By offering customers trendy shopping bags that properly reflect the brand’s image, retailers can now be included in the post-purchase photos that customers upload to social networking sites after a long day of shopping.