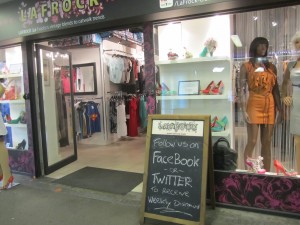 Many brands and retailers are using social media to advertise and build relationships with customers online.

However, if these businesses fail to integrate social media into the shopping experience at brick-and-mortar stores, they are missing out on a huge opportunity.

A Majority of U.S. Consumers Have a Smartphone

According to comScore, “198.5 million people in the U.S. owned smartphones (79.1 percent mobile market penetration) during the three months ending in January.”

To put this into perspective, the U.S. Census Bureau estimates that 322.9 million people lived in the U.S. at the end of January of 2016. That means approximately 61.5% of the U.S. population owned a smartphone.

What this also means is that there is a good chance that many of your customers and prospects not only own a smartphone, but are using it to make purchase decisions.

In his book, titled “Mobile Influence: The New Power of the Consumer,” Chuck Martin, author and CEO of the Mobile Future Institute, points out that there are six influence points in the mobile shopping life cycle. These include: The Setup: The Pre-Buy, The Move: In Transit, The Push: On Location, The Play: Selection Process, The Wrap: Point of Purchase, and The Takeaway: Post-Purchase.

At each stage in the mobile shopping life cycle, brands and retailers are given the opportunity to convince a consumer to buy their product or service. In his book, Chuck Martin devotes a chapter to each of these points of influence.

As he points out, there are many tools in a marketer’s toolbox to help influence a sale by leveraging the power of the mobile phone.

This includes, but is not limited to, the use of social networking sites to connect with consumers as they research, buy, and share the love of a brand online.

Given that many online interactions can now happen when the consumer is physically located in a brick-and-mortar store, it only makes sense that brands and retailers should look for additional ways to interact with customers as they are making purchase decisions and influencing the purchase decisions of other consumers who they interact with online.

As mentioned, a majority of U.S. consumers own a smartphone.

Furthermore, according to a study conducted by the Pew Research Center, in 2014 75% of smartphone owners used their phones to access social networking sites.

And, this is just the percentage of people who used social media on a smartphone.

When you consider the fact that even people who don’t use social networking sites on a smartphone could be connected to someone who does, I would venture a guess that nearly everyone who uses social media could potentially be influenced by an interaction that a consumer has with a brand while the consumer is in a brick-and-mortar store.

The number of people who use social networking sites continues to increase, as does the number who own smartphones.

While many brands and retailers currently use social media to advertise and build relationships with customers and prospects online, if they don’t integrate social media into the offline shopping experience at brick-and-mortar stores they could be missing out on a huge opportunity to reach and engage with customers at each of the influence points in the mobile shopping life cycle that Chuck Martin describes in his book.