Not Your Father’s Super Bowl Ads 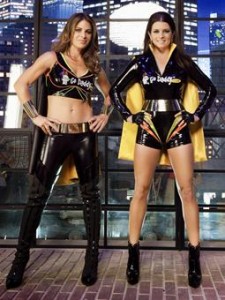 In recent years, when you tuned in to watch the Super Bowl, you could expect to see some beer commercials, car commercials, an occasional movie trailer, and a GoDaddy commercial or two that featured scantily dressed women who encouraged viewers to host their web sites or register their domain names with GoDaddy.com.

This year, you shouldn’t expect the scantily dressed women—at least from GoDaddy.

Last fall, GoDaddy announced that in 2014 they are going to take their advertisements in a new direction.

According to a press release issued in October of 2013, GoDaddy confirmed that this year’s Super Bowl commercials won’t have the risqué innuendo viewers expect to see in a GoDaddy Super Bowl advertisement.

The press release states that “GoDaddy’s marketing has evolved with the company’s overall transformation under new CEO Blake Irving, who is committed to maintaining GoDaddy’s edge, but in a way that speaks inclusively to the customer base and demonstrates the value the company provides to small businesses and entrepreneurs.”

In other words, GoDaddy is making an effort not to alienate women.

Less Cheesecake Is Good for Business

According to Gordon, “Sadly, so far the track record of the work has been pretty degrading in their depictions of women. In 2013 we saw waitresses turned strippers, scantily clad women tackling each other in the dirt, and a supermodel sloppily kissing a computer programmer.”

“Those were the major marketing fumbles of the day,” continues Gordon. “Not only were these ads off-putting to women, but many men also tweeted their wish for something other than lowest-common denominator creative. And the old adage that “sex sells” is being refuted with research that says that brand recall dips when the brain is busy processing ta-tas.”

That alone would make some brands take note. However, it is some of the other statistics that Gordon points out that may have caused GoDaddy and other brands to show a little less skin this year.

“According to Nielsen demographic data, 46 percent of the Super Bowl viewing audience is female, and more women watch the game than the Oscars, Grammys and Emmys combined,” writes Gordon. “She-conomy.com reports that women influence the majority of consumer spending across all categories, and onlineMBA.com published a report that found women comprise the majority of Twitter users (59 percent). Finally, women out-tweet men by 60 percent, per a study of 1,000 British Twitter accounts by Brandwatch.”

This points to the fact that female consumers are not only very influential when it comes to making purchase decisions, they are very vocal about it.

This makes the female consumer a force to be reckoned with.

That would explain the fact that this year’s Super Bowl ads are going to feature a lot less cheesecake and a lot more beefcake.

Note: For additional information about what to expect in the 2014 Super Bowl ads, check out this USA Today article.

Each year, brands spend millions of dollars to reach consumers during one of the most watched events of the year.

Given the fact that nearly half of the Super Bowl viewers are female and they tend to be the most vocal online, it is not surprising that brands have stopped ignoring this important demographic and started to create ads to meet their expectations and desires.

In 2014, it is important that brands create ads that appeal to both men and women in an effort to maximize their return on investment.