Focus on the Non-Shopper to Increase Retail Sales 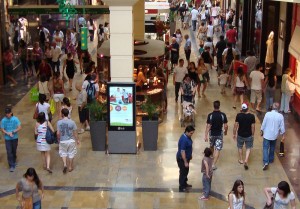 When examining the shopping experience, a lot of effort is put into thinking about the needs of the shopper. However, it seems that some retailers forget the role that non-shoppers play.

The Role of the Non-Shopper

In his book, “Call of the Mall: The Geography of Shopping by the Author of Why We Buy,” (affiliate link) Paco Underhill identifies some of the challenges that retailers face.

“If an adult has to drag two sullen adolescents along for every step of a shopping expedition, you can be sure that the trip will end prematurely,” writes Underhill. “Whereas if those adolescents can be given some enjoyable outlet for their entertainment, they’ll let you shop as long as you want. The mere promise of a reward may keep them quiet. (Of course, when you’re ready to go you may have to drag them out of the mall.)”

Even if a couple has the benefit of getting a babysitter to watch their children, the non-shopper in a couple can also present similar problems. In many cases, it is the male who plays this role.

Although there are exceptions to the rule, most men do not get as much satisfaction from shopping as their significant others do, unless they are in a sporting goods or electronics store.

If the mall has an electronics store (e.g., Apple Store, Best Buy, etc.) or even a book store, then the male can waste some time there. If he is lucky, there is a food court with a television set, or even better yet, a sport’s bar with all the entertainment that most men need.

However, if the store is not connected to a mall and there aren’t any other places to walk to, then the male is left to tag along like a puppy dog or wander aimlessly around the store until his significant other is done shopping. (Sure, if there is a men’s department, he can check that out. But, if he doesn’t want to make a purchase, that will only take a few minutes of his time.) This could result in the female shopper leaving the store before she wants to, which could cost the store money. 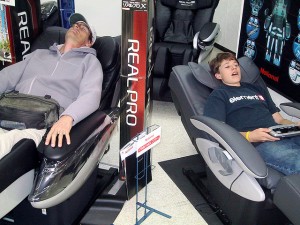 The solution might be as simple as providing an area where men can sit down and watch television. This could be enough to give the female the time she needs to shop. (As an added bonus, the area could be sponsored by a brand that caters to men. This would offset the cost of lost floor space, and possibly add to increased sales in the long run.)

In 2011, a friend of mine posted this tip on Foursquare: “They give the guys free beer so they can relax while their wife/girlfriend shops!”

He was talking about a boutique store in Deer Park, Illinois. Not only did they give him something to do while his wife shopped, they created an experience memorable enough that he wanted to share it online. I’m guessing that his wife was able to take her time shopping. I would also guess that it wouldn’t be too hard to get him to go shopping with her the next time she visits this particular store.

It should be noted that this is not the only store to offer free beer to customers. Bill Hallman, a clothing store in Atlanta was featured in a 2006 Adweek article for doing the same thing. In that case, Peroni, an Italian import, paid the store for the privilege of being the beer served.

In many cases, when customers enter a retail store with the intent to make a purchase, they are accompanied by non-shoppers who can distract from the shopping experience. In some cases, this distraction can be so overwhelming that the shopping trip is ended prematurely.

It is for this reason that it would be in their best interest for retailers to focus some of their attention on the non-shoppers.

Retail experts have countless suggestions on ways to entertain the non-shoppers so that the shoppers have all the time that they need to accomplish what they set out to do.

In fact, many stores have already identified the role that non-shoppers play in the shopping experience and have found ways to entertain them so that they don’t become too big of a distraction. Among other things, it is not uncommon to have a restaurant or coffee shop near or within the retail store. And, as shown, when that is not an option, some small boutique stores have gotten creative with the way that they “distract” the non-shoppers within the group.

While it will vary by the type of store and where it is located, the important thing is that retailers find ways to entertain non-shoppers, as they may have a greater impact on the store’s bottom line than one might think.