In my last post, I pointed out that the words that we choose to use can influence the way that people interpret what we are trying to say.

A Real-World Example of the Power of Words

Not long after I posted the blog post, the point that I was making was illustrated perfectly in an article that was published by the Huffington Post.

However, in this case, it wasn’t an incorrect choice of words that caused the problem; it was the omission of the word “acquisition” that created the confusion.

According to a tweet by Peter Shankman, when the Huffington Post first published their article, it said, “Facebook has said it expects the Instagram to close sometime this year.” (Or, something similar to that—I didn’t see the actual post before the change was made. I am relying on Mr. Shankman as a trusted source.)

However, the mistake was spotted and the article was updated. Fortunately, Mr. Shankman found out about it and tweeted this: 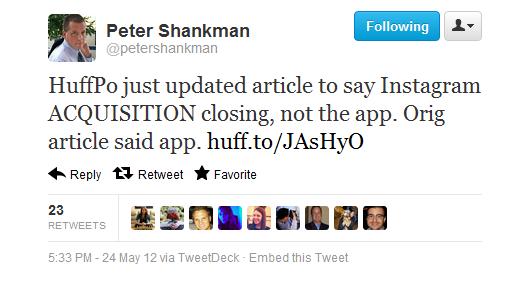 However, Mr. Shankman’s original tweet was still out there and not everyone saw his tweet about the typo. Therefore, misinformation continued to spread on Twitter the next day.

For example, his tweet was retweeted by Britton Edwards, and it looks like that is how Emily Binder found out about it. This led her to tweet: 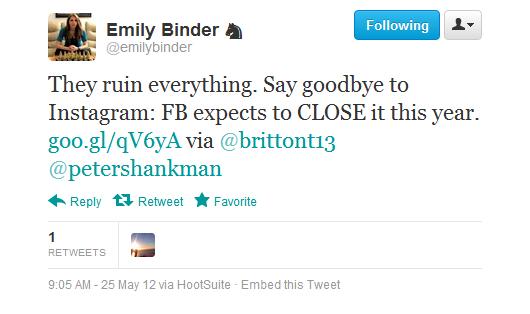 This is how I found out about the post and the typo.

Now, as you can see, the omission of the word “acquision” changed the meaning of the sentence in the article and rumors of Instagram closing started to spread on Twitter. In fact, they continued to spread even after the article was fixed and Mr. Shankman tweeted about the correction.

I’m guessing that a lot of people had the same reaction that Mr. Shankman and Ms. Binder did. Just think about how many other people tweeted this.

The example that I gave in this post illustrates the fact that one word can make a huge difference in how people interpret what you are trying to say. (It also illustrates how rumors can easily be started by an innocent mistake.)

Therefore, it makes sense to not only pay attention to what you say, but also how you say it.

If you are interested in reading about this further, I’d check out Peter Shankman’s blog in the next few days, as it sounds like he might have a thing or two to say about it. (I will update this post with a link if he does write a post about this in the near future.)