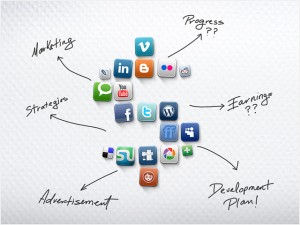 Many businesses have dedicated a lot of resources to try to figure out why content gets shared on the Internet.

While many factors play a role in influencing what gets shared and what doesn’t, most experts agree that posting great content is essential. After all, why would people share something if it isn’t interesting in the first place?

Once you have great content, getting it in front of the right people (key influencers) is also important. Getting these key influencers to share your content is going to go a long way in increasing the reach of your message.

The best advice that I can give you about where you should post content is to post it where your customers and potential customers hang out.

You see, if you use this logic, you are forgetting the role that key influencers play in social media.

Given all the potential noise that’s out there on Facebook and Twitter, it might be easier to get your message in front of key influencers if you post on Google+ or Pinterest. If the content is good enough, the key influencers will hopefully post it on the other social networking sites that they use. In this case, if they share it on Facebook and Twitter, it would put your content right in front of your customers and prospects, with the added benefit that it is being shared by people that your customers and prospects know and respect. That’s priceless.

The Role of Traditional Media

To complicate the matter even further, traditional media can also play a role in spreading your message.

As Tom Webster points out in a blog post, titled “Why Twitter Is Bigger Than You Think,” when you post something on Twitter, it has the potential to be talked about in the traditional media. In fact, according to research conducted jointly by Arbitron and Edison Research, 44% of all Americans age 12 or older report that they see tweets in other media (e.g., radio, television, newspapers, or other websites) “almost every day.”

Now, before you go running to your coworkers to tell them that your business should be posting on Twitter in order to help get your content shared in other media, you need to keep in mind that the research is only saying that it is possible that your content will be mentioned by traditional media outlets if it is posted on Twitter. However, is it likely? Probably not.

You will need to post some really remarkable content for it to be shared by the traditional media outlets. But, it could happen.

Also, keep in mind, the study only looked at Twitter. (At least, that’s the only site that was mentioned in the blog post.) The same thing could happen if you post on any social networking site. And, as mentioned, if it is good enough, your content will probably find its way to Twitter even if you don’t post it there. (If it is content posted on your blog or website, having social sharing buttons helps make this easier.)

There are a lot of things to consider when deciding where you should be posting your content.

Furthermore, by posting your content on various social networking sites, it makes it possible for your message to be spread in other media, as well.