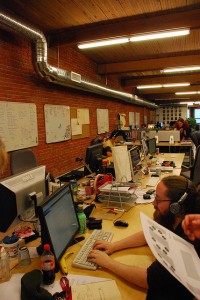 According to the Society for Human Resource Management (SHRM) 2011 Employee Job Satisfaction and Engagement report, 83% of U.S. employees were at least somewhat satisfied with their jobs in 2011.

However, this doesn’t mean that companies can rest on their laurels.

In fact, as I pointed out in the last post, maintaining high levels of employee job satisfaction may be more important for companies now than it was in the past.

Aspects of Job Satisfaction Most Important to Employees

The SHRM study found that the aspects of job satisfaction that were most important to U.S. employees in 2011 included: Job security, opportunities to use skills and abilities, the organization’s financial stability, relationship with their immediate supervisor, compensation/pay, benefits, communication between employees and senior management and the work itself.

Given the recent economic conditions, it’s not surprising that job security and the organization’s financial stability were among the aspects of job satisfaction that were most important to U.S. employees in 2011.

It’s also not surprising that compensation/pay and benefits ranked high on this list since they have been among the most important job satisfaction contributors for many years. However, at 53%, the percentage of U.S. employees who said that benefits were very important was lower in 2011 than it has been recent years.

In contrast, the percentage of U.S. employees who said that opportunities to use skills/abilities is a very important aspect of job satisfaction has been trending upward in recent years.

Knowing what aspects are most important to employees is only half of the equation.

You also need to know how satisfied employees are with each aspect and then compare that to their respective importance level.

Aspects that are very important to employees but rank low on employee satisfaction are the aspects that companies should take a look at and try to improve on in the future, if possible.

According to the SHRM study, less than three of 10 U.S. employees reported being very satisfied with their organization’s financial stability, job security, benefits, communication between employees and senior management, and compensation in 2011. And, if you recall, these were all among the most important aspects of employee job satisfaction.

As the SHRM report points out, there are many factors that influence employee job satisfaction and engagement, including restructuring, demographic makeup of the organization, change in management, economic change, political change, global change and many others.

While companies have no control over some of these factors, there are things that they can do to mitigate the negative effects that they have on employee morale.

The SHRM report suggests that HR professionals help their organizations cultivate a culture that promotes employee engagement and job satisfaction through policies and practices, training line managers to better communicate their company’s mission and vision, and involving line managers in the organization’s strategic planning.

It is also suggested that organizations conduct their own employee satisfaction and engagement surveys to measure how well they are doing and then benchmark their results against other companies of a similar size within their industry.

I’d suggest checking out the SHRM report in its entirety, as it is filled with other valuable insights and information that can help your company make better decisions in the future.