The Allure of the QR Code 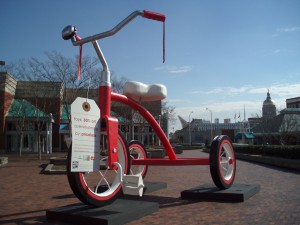 About a year ago, MasterCard and SunTrust Bank implemented an interesting marketing campaign that included larger-than-life versions of products that could potentially be on your holiday shopping list.

As part of the marketing campaign, a huge tricycle was placed in the Five Points neighborhood in Atlanta, Georgia, and a gigantic digital camera was put in the nearby Peachtree Center Mall.

However, it was the matrix barcode that was included on the tag attached to these items that really piqued my interest.

The tag included a statement saying, “Scan this code with your phone to see today’s Overwhelming Offer.*”

However, at the time, I didn’t read the statement.

Instead, my mind raced, thinking of all the cool ways that the advertising agency or public relations firm responsible for creating the campaign could have potentially used this opportunity.

As you may know, the Quick Response code (QR code) was originally created by Denso Wave, a subsidiary of Toyota, in 1994 for use in tracking vehicles during the manufacturing process.

However, more recently, QR codes and similar two-dimensional barcodes have been coopted by marketers looking for ways to catch the attention of potential customers.

If you are reading this blog, there is a good chance that you have at least thought about the potential uses of QR codes, and more than likely, whether good or bad, have an opinion about them.

But, does the general public know what QR codes are? And, more importantly, do they use them?

If you believe the results of an informal nonscientific survey conducted by Sean X Cummings on the streets of San Francisco a few months ago, then QR code awareness is rather low. In fact, only 11% of respondents could properly identify a QR code when shown one. An additional 29% said that the QR code was “some barcode thingy.”

These results are not surprising considering the fact that according to a comScore study, only 14 million mobile users in the U.S., representing 6% of the population of the total mobile audience, scanned a QR code on their mobile device in June, 2011. (Note: The results are based on data from the comScore MobiLens service.)

While very few people in the general public scanned a QR code in June of 2011, it appears that the likelihood of scanning QR codes is somewhat higher among smartphone users. (This makes sense, since a smartphone is generally required to scan a QR code in the first place.)

According to an online survey conducted by the agency MGH in February 2011, 65% of smartphone users had seen a QR code, and 32% had scanned at least one QR code in the past.

Furthermore, while the overall number of people who scan QR codes is rather low, this number might increase as more people purchase smartphones.

In the next few weeks, I plan to write a few blog posts that discuss some of the pros and cons of QR codes and their potential uses. 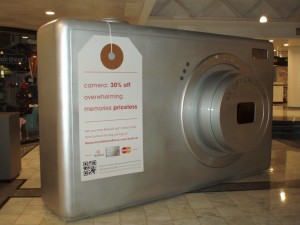 But, back to the example that I started off with.

At the time that I encountered the larger-than-life holiday shopping list items, I hadn’t yet purchased a smartphone, so I was unable find out what surprise was waiting for me or any other person who took the time to scan the QR code.

Judging from the statement on the tag, it might have been better left to my imagination.

But, then again, I will never know.