Social Media and Television Part Two: A Game of Ping-Pong 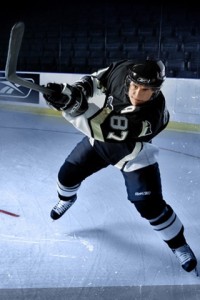 However, traditional media (e.g., television, print, radio, etc.) is not going away any time soon.

As I mentioned in a post, titled “Social Media and Television: A Symbiotic Relationship,” the rise of social media is not necessarily hurting television ratings.

This is something that many brands and their advertising agencies have taken note of.

The ones that haven’t should seriously consider integrating social media into their traditional advertising campaigns.

The Thank You Economy

He points out that when brands run television ads, they should use social media to keep the conversation and connection going.

Vaynerchuk uses Reebok as an example of a brand that successfully executed this strategy when he talks about its marketing campaign for Speedwick training T-shirts.

Reebok started by running a television ad that featured Sidney Crosby and Maxime Talbot from the 2009 Stanley Cup champions, the Pittsburgh Penguins.

The ad features Crosby and Talbot paying a visit to Crosby’s childhood home in Nova Scotia.

During the commercial, they head down to the basement and admire a dent-riddled clothes dryer that caught every puck that Crosby didn’t get into his practice net when he was growing up.

Tablot was leading 3-1 when Reebok abruptly flashed the words, “See who wins at facebook.com/reebokhockey” on the television screen. (Click here to watch the commercial on YouTube.)

In order to see who won, viewers had to become a fan of Reebok on Facebook.

And, that is exactly what many viewers did.

According to Vaynerchuk, in a short amount of time, Reebok saw the number of fans of their Facebook page (or the number of people who like the page, as it is now called) increase by the tens of thousands.

In addition to all of the free word-of-mouth advertising that the campaign generated, it also gave Reebok the ability and permission to remarket to these people in the future.

Vaynerchuk explains how brands should combine social media and traditional advertising by having his readers think about the game of Ping-Pong.

“When traditional and social media work well together, as they did for Reebok, it’s like a friendly Ping-Pong match,” writes Vaynerchuk. “Instead of spiking their traditional media and ending the match, Reebok hit the ball back over to social media. Ping. Then they gave social media a chance to return the shot. Pong. Anyone can do it. Develop creative work that allows the platforms to rally, to work together to extend your story, continue the conversation, and connect with your audience.”

In March of 2011, fastcompany.com published an excerpt of Vaynerchuk’s book in a blog post, titled “Old Spice Man Marketing, Redux: What Went Right–and What Did Not.”

You might want to read it, as it has some very interesting insights.

If your business does decide to integrate social media into its traditional marketing campaigns (or even if it decides not to), don’t forget about SEO.

For an explanation about why SEO is so important to the success of your marketing campaigns, check out a recent guest post that I wrote for the strategyessentials.com blog, titled “When Developing Your Next Marketing Campaign, Don’t Forget About SEO.”

The post has some very interesting insights from Vanessa Fox, former Google employee and founder of Nine By Blue, including an example of a brand that understood the importance of taking the story that it started during a Super Bowl advertisement and extending it online.

However, the brand dropped the ball because it forgot about SEO.

Brands that take advantage of the opportunity to extend their story online can definitely benefit from their efforts.

Not only will it help fuel online conversations about the brand, but when properly executed, it can give the brand the ability to remarket to its target audience with very little effort.

And, if the brand makes sure that consumers benefit from future interactions in some way, the ROI of its marketing efforts might be immeasurable.