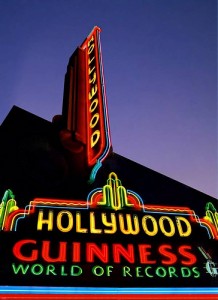 The Guinness World Records (formerly known as the Guinness Book of Records) is a very popular publication. In fact, it is so popular that according to Wikipedia, it holds the world record for the best-selling copyrighted book series of all time.

Given its popularity, it’s not surprising that brands have invested the time and effort to earn the bragging rights associated with being a Guinness World Records record-holder.

Here are a few recent examples.

Oreo and the 24-Hour Record

This record was briefly held by Oreo.

As a press release on prnewswire.com, titled “Oreo Is First to Set Guinness World Records® Mark for Most ‘Likes’ on a Facebook Post in 24 Hours,” points out, “The record attempt began on Tuesday, February 15 at 9 a.m. EST, when the Oreo Facebook community of 16 million fans from around the world was invited to “like” the following post: “‘Like’ this post to join other Oreo fans around the world in setting a Guinness World Record for most ‘likes’ to a post in 24 hours. Oreo is the world’s favorite cookie, and with your help, it will be the most ‘liked.'” The feat rallied fans from around the globe and instantly inspired others to attempt to set similar Facebook records.”

By 9 a.m. the next day, Guinness World Records confirmed the record, as 114,619 fans from around the globe had “liked” the post.

Unfortunately, Oreo’s record for most “likes” on a Facebook post in 24 hours didn’t even last 24 hours; five hours later it was broken by rapper Lil Wayne.

Mitsubishi and the Five Guinness World Records in 24 Hours

In fact, they like setting them so much that they attempted to establish five Guinness World Records for driving in winter conditions in less than 24 hours.

A post on mashable.com, titled “Mitsubishi Breaks 5 Guinness World Records in 24 Hours [VIDEO],” mentions, “Mitsubishi, along with its agency, 180 Los Angeles, and Guinness World Records, traveled to Ghost Lake in Alberta, Canada, with the goal “to do something that’s never been done before, set as many world records as possible in 24 hours.” The Outlander and Outlander Sport are now the most awarded family of all-wheel drive vehicles, having done just that.”

According to the post on mashable.com, the records broken on Ghost Lake that day included:

“Greatest distance driven by a vehicle in reverse on snow in 30 seconds (300 meters).”

“Shortest braking distance by a vehicle on ice (56.2 meters).”

“Most vehicle figure eights on ice in two minutes (3 laps).”

The Loudest Scream Sponsored by PrimeCredit

Hong Kong’s 2009 economic crisis created a high demand for personal loans. At the same time, banks were being accused of making the loan process too difficult and offering inflexible payment plans.

In an effort to set itself apart from other banks, PrimeCredit, a subsidiary of Standard Charter Bank, repositioned itself as the ideal financial institution that is “willing to help at all times.”

In an effort to reinforce its “Always Here to Back You Up” positioning and encourage greater brand affinity, PrimeCredit decided to gather Hong Kong citizens to break the Guinness World Record for the world’s loudest scream by a crowd (indoors.)

A word-of-mouth campaign was initiated and a “PrimeCredit — Always Here to Back You Up” event was held with popular local singers to help pique the interest of the media. The team recruited to ensure the record would be broken underwent “mega-vocalization” training from a drama tutor and Taekwondo master, which led to additional coverage from the media. Finally, celebrities and relevant media were invited to the event in an effort to create even more buzz.

The words shouted to break the record itself were: “Back you up.”

And, break the record they did.

The PR campaign was so successful that it was awarded a silver at the 2010 Asian Marketing Effectiveness Festival for the most effective use of public relations.

As the description of the campaign on the ame.asia website mentions, “The gap between Prime Credit and second-ranked competitor Promise in the ‘most preferred’ brand category widened by two and a half times, according to Synovate. PrimeCredit stood at 27 per cent compared with Promises’s 22 per cent. The brand also ranked highest in the ‘willing to help at all times’ category’. The record attempt was successful, and attracted 1,000 participants in total. 40 journalists attended the event and 67 articles in news media followed, amounting to nearly US$ 2 million of PR exposure for PrimeCredit.”

As mentioned in a recent blog post, titled “The Importance of Pinpointing Your Target Market,” Unilever’s Axe line of male grooming products is targeted to men aged 18 to 24. Therefore, it is not surprising that Axe, or Lynx as it is known is some markets, would sponsor an event that featured beautiful women in bikinis gathered under a single showerhead in an effort to break a Guinness World Record.

According to a post on guinnessworldrecords.com, titled “VIDEO: GROUP SHOWER WORLD RECORD BROKEN ON UK BEACH,” despite the chilly conditions, 152 young men and women gathered on Bournemouth Beach on August 13, 2011, to break the record for most people to shower simultaneously at a single venue. (Note: The previous record of 145 people was set in Chicago, Illinois, in 2009.)

A six meter high shower was built for the record-breaking attempt sponsored by Lynx.

Want to have another look at the record-breaking shower? Check out this YouTube video, titled “Official World Record – Lynx Giant Shower – over 150 people.”

Whether it is an effort to increase brand engagement and participation via social media, for use in television commercials or other marketing campaigns, to generate some good PR for your brand or just for some good clean fun that will create some buzz about your brand, the use of Guinness World Records is an interesting marketing tactic.

And, as shown, it can be a very effective one at that.

It is not without its risks, though.

As a post on mashable.com, titled “Oreo Tries To Set Guinness Record for Facebook Likes,” points out, “For Oreo, the stunt is a clever use of social media that is not without its risks; falling short of the goal could be embarrassing.”

However, if your brand does break a record, it earns the well-deserved bragging rights that are associated with being a Guinness World Records record-holder.

This has the potential to increase the connection that your customers have with your brand.

Even better, when you involve your customers in the record-breaking effort, you give them the ability to say that they helped set a Guinness World Record.

With approximately 40,000 records currently being tracked, and new categories being added daily, more than likely there is a Guinness World Record that is appropriate for your brand.

So, what are you waiting for?