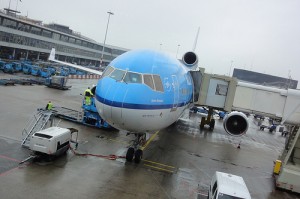 However, the number of people using location-based social networking sites is still growing. As mentioned in a previous post, titled “In the Spotlight: An Introduction to Foursquare for Business,” Foursquare recently passed the 10 million user mark.

As I also mentioned in that post, there are several reasons why brands might want to incorporate location-based social networking sites into their marketing mix.

In fact, many brands are already taking the lead and doing some very cool things with this technology.

Here are a few examples of some of the most imaginative ways that brands have used location-based social networking sites in their marketing efforts.

I first read about the KLM Surprise program in a blog post on txt4ever.wordpress.com, titled “Ten brands that are using the Foursquare check-in.” (This post lists some other interesting uses of location-based social networking sites for marketing purposes. Therefore, you might want to check it out for additional ideas.)

KLM Royal Dutch Airlines monitors these social media sites and selects passengers to give small gifts to. Each gift is selected based on the passenger’s tastes (inferred from what they post on Facebook and Twitter.)

Passengers never know when or where they will be rewarded. But when they are, it usually brings a smile to their face.

For more information about the KLM Surprise program, visit surprise.klm.com or check out this YouTube video, titled “KLM Surprise.”

Earlier this year, Mashable posted an article, titled “German Billboard Dispenses Dog Food When You Check In on Foursquare [VIDEO].”

The name of the article says it all.

As the video in the post explains, the GranataPet billboard is designed to increase awareness of GranataPet brand dog food.

When dog owners walk past the billboard while walking their dogs, they can check in on Foursquare, and the billboard dispenses fresh GranataPet dog food for their dogs. This not only introduces the product to dog owners, but by including the social media element, the dog owners are able to share their Foursquare check-ins on Facebook and Twitter.

For additional information, check out the Mashable article or watch this video on YouTube, titled “GranataPet Snack Check.”

Lest you think that our friends in Europe get to have all the fun, check out this article on marketwire.com, titled “MLB Fan Cave Debuts Foursquare Digital Vending Experience.”

As reported in the article, “The legendary MLB Fan Cave on the corner of Broadway and East 4th Street in Manhattan has premiered a never-been-done-before digital out-of-home (OOH) storefront.”

What this is, is a customized Foursquare-linked smartphone vending experience that dispenses official MLB baseballs upon user command.

When Foursquare users in New York City who encounter the Foursquare vending experience check in to “THE FRANCHISE on Showtime” via Foursquare, the intelligent storefront releases an official MLB baseball.

According to the article, a few lucky participants received autographed baseballs. (Note: The baseball is free; the check-in is the only payment required.)

The purpose of the innovative experience is to promote the “THE FRANCHISE: A SEASON WITH THE SAN FRANCISCO GIANTS,” a new docu-series that premiered on July 13 on Showtime.

These are just three examples of the some of the cool things that can be done with location-based social networking sites.

Of the three examples that I listed in this post, the KLM Surprise program is the most labor intensive (the other two are automated solutions.) However, it would also be the easiest to replicate, if another brand wanted to invest the time and effort.

The other two examples that I gave really peak my interest.

They are examples of some of the really cool things that can be done with location-based social networking sites.

In the future, it might be commonplace to see a vending machine in a public area (e.g., a grocery store, mall, amusement park, etc.) that gives out samples of a product, just for checking in on Foursquare or any other location-based social networking site.

And, I think this is only the beginning.

As more brands start using these technologies in innovative ways, more people might recognize the value of location-based social networking sites, which could hopefully lead to mainstream adoption of this technology.

This will inspire brands to push the envelope even further.

I can’t wait to see what they will think of next.