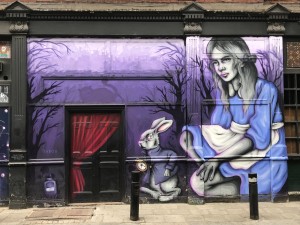 If you are concerned about how online communications affect your business, it is important to remember that businesses are made up of people.

As people, we hopefully care about other people just as much or more than we care about making a profit.

After all, if we don’t look out for our customers, we might end up not having any.

It is therefore important that we identify how the world around us is influencing the lives of our current and potential customers so that we can change our communications strategy or even modify the type of product that we currently offer to them. We might even identify new products that can help fix the problems that they face.

For example, we should be watching how algorithms are having an effect on the content that users see. These algorithms often lead users down rabbit holes that expose them to very radical ideas.

Unless you are in a leadership position at one of the major search engines or social networking sites, the algorithms that these search engines and social networking sites use to help users discover new content are beyond our control. However, knowing how they can influence society, and in some cases cause harm, can and probably should change the way that we do business.

At the very least, it is important to know what is going on so that we can make informed decisions in our personal and professional lives.

As pointed out in the last post, search engines use many different signals when determining what will show up on the first page of a Search Engine Results Page (SERP.)

While the factors that influence what shows up on page one of a SERP are constantly changing, it is safe to say that if there is a lot of negative content about you or your business online, there is a good chance that Google will find it.

If a person with a grudge against you or your business is adept at manipulating the search engine algorithms, you can be in for some pain.

As I pointed out in a post in 2015, experts have identified cases where the same tactics used by businesses to get found on a SERP were used to help sully the reputation of political figures. In one case, these tactics were used to spread a malicious and racist campaign that targeted Michelle Obama. While the leadership at Google made the choice to clean the search results for Michelle Obama and end the smear campaign against her, this doesn’t always happen.

It is therefore important to keep in mind that sometimes even the results found on page one of a SERP might not contain the best information about a topic. In fact, in some cases, the information found might not be accurate at all.

In other words, “User beware.”

From a business standpoint, it makes sense to monitor what is being said about your company and see what shows up when people do both branded and nonbranded keyword searches related to your company.

It is also important to monitor what is being said about you and your business on social networking sites, because these posts can and often do show up in a Google SERP.

That said, there are even more issues that you need to be aware of when we look at social media and algorithms. Some of these issues will be covered in the paragraphs that follow.

Before we begin here, it needs to be pointed out that social networking sites are businesses.

In an article on The Guardian website, Natasha Schull, the author of Addition by Design, is quoted as saying, “In the online economy, revenue is a function of continuous consumer attention – which is measured in clicks and time spent.”

“Whether it’s Snapchat streaks, Facebook photo-scrolling, or playing CandyCrush, Schull explained, you get drawn into ‘ludic loops’ or repeated cycles of uncertainty, anticipation and feedback – and the rewards are just enough to keep you going,” the author of the article continues.

This is what helps the business sell itself to advertisers. If the site can deliver users who click on content and stay there, then it is assumed that it would be a good place for businesses to advertise their products.

That’s the way it currently is, clicks and time spent on the site get rewarded. I don’t think this is necessarily good or bad. It just is.

In fact, it appears that at least on YouTube, it is often outrageous or radical videos that get recommended to users. This often guides them down an online rabbit hole that can, if it goes unchecked, lead to them to even more outrageous or radical videos. If people start to believe these videos they will surely start to share them. This means they will often will be spreading of a lot of misinformation and “fake news.”

Down the Rabbit Hole

In case you are not familiar what we mean when we talk about rabbit holes, The Free Dictionary defines “go down the rabbit hole,” as “To enter into a situation or begin a process or journey that is particularly strange, problematic, difficult, complex, or chaotic, especially one that becomes increasingly so as it develops or unfolds. (An allusion to Alice’s Adventures in Wonderland by Lewis Carroll.)”

To get an idea of how algorithms on social networking sites can lead you down an online rabbit hole, you might want to read an article published in the New York Times in 2018 that was written by Zeynep Tufekci, Ph.D.

“It seems as if you are never ‘hard core’ enough for YouTube’s recommendation algorithm,” writes Dr. Tufekci. “It promotes, recommends and disseminates videos in a manner that appears to constantly up the stakes. Given its billion or so users, YouTube may be one of the most powerful radicalizing instruments of the 21st century.”

Dr. Tufekci again points out that it is Google’s current business model that is to blame. As she points out, “The longer people stay on YouTube, the more money Google makes.”

“What keeps people glued to YouTube?” Dr. Tufekci continues. “Its algorithm seems to have concluded that people are drawn to content that is more extreme than what they started with – or to incendiary content in general.”

The conclusion that Dr. Tufekci makes is that one of the unintended consequences of YouTube’s recommendation algorithms is that after being exposed to these extreme videos, people get used to them and start to search out even more extreme videos.

Again, if this goes unchecked, we could end up with a lot of people believing a lot of extreme ideas that often are not based on verifiable facts.

“This situation is especially dangerous given how many people – especially young people – turn to YouTube for information,” writes Dr. Tufekci.

What You Can Do About It

It is unclear if there is a way to fix the problem.

As pointed out earlier, most of us don’t have any control over these algorithms.

Sure, government could step in. However, is government intervention the best answer? And, would they have the expertise to create laws that would fix the problem?

However, it is important that we teach people what is going on so that they can make educated decisions for themselves.

By spreading the word about what is going on you can help accomplish this goal.

From a business standpoint, it is also probably worth your time to research what is being said about your company on sites like YouTube. It is possible that YouTube users could be directed to false claims about your company that you thought were well in the rear-view mirror.