Cashless Stores: Ahead of Their Time or Just Bad for Business? 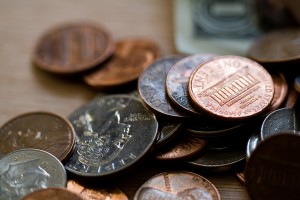 For years now, many experts have predicted the demise of cash.

But even with more consumers adopting alternative ways to purchase items, it appears that cash isn’t going away anytime soon.

In fact, this is something that Jeff Hasen, one the pioneers in mobile marketing, often points out on Twitter. 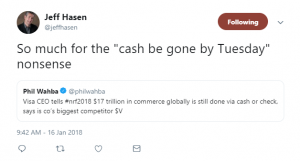 “Cash remains the most frequent method of payment in the U.S., representing roughly 31 percent of consumer transactions, more than electronic, credit, debit or checks,” the author of the article writes.

According to the same article, “Use of cash by U.S. households is consistent across most income levels, around 25 percent, and goes way up at the lowest incomes.”

That said, this is not stopping some stores from trying to follow Amazon’s lead and eliminate cash as a payment option.

I think that it’s good that stores are trying different things to see what works.

However, as you might have expected, stores that try to go cashless are often met with some resistance.

Amazon Is Leading the Way

The headline of a recent Bloomberg article says it all, “Amazon Will Consider Opening Up to 3,000 Cashierless Stores by 2021.”

If you are not familiar with the AmazonGo cashierless store concept, the basic idea is that shoppers enter the store with a smartphone app downloaded to their phone, they scan their phones as they enter the store, they shop and leave with the items that they want to purchase without having to stop at a cash register.

As the Bloomberg article points out, “Sensors and computer-vision technology detect what shoppers take and bills them automatically, eliminating checkout lines.”

In this scenario, cash is not an option.

While not going all the way to cashierless stores, other merchants are experimenting with the idea of eliminating cash in order to cut costs.

The Cost of Accepting Cash

A USA Today article highlights some of the expenses involved in processing cash transactions, as reported in an IHL report.

According to the article, “Besides the time spent counting bills and making change, they include ensuring registers have enough change, running cash to the bank, bank fees, armored cars, employee theft and robberies, the report says.”

“All told, such hassles cost retailers an average of 9.1 percent of sales, ranging from 4.7 percent at grocery stores to 15.5 percent at restaurants and bars, IHL says. That compares to the 2 to 3 percent transaction fees credit-card companies charge merchants,” the USA Today article reports.

Therefore, it’s not surprising that some stores are looking to eliminate cash.

But this has its downside.

This is the main point of a recent article published on The New York Times website.

According to the author, Ginia Bellafante, there are several arguments against going cashless.

“The strongest objection relates to the ways in which rejecting physical currency plays out as a bias toward the poor; advancing segregation in retail environments,” writes Bellafante.

“According to government data, close to 7 percent of American households have no one in them with a checking or savings account, while an additional 19 percent are considered “underbanked,” meaning that they rely on products or services outside the conventional financial system,” the author continues. “These include money orders and payday and pawnshop loans. The majority of people who fall into these categories are nonwhite.”

Laws Are Being Written to Prevent Cashless Brick-and-Mortar Stores

When the article on The New York Times website was published, many people wondered if it was even legal to go cashless.

As Jarrod Frates points out on Twitter, according to the U.S. Department of the Treasury, “Private businesses are free to develop their own policies on whether or not to accept cash unless there is a State law which says otherwise.” 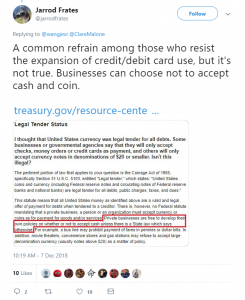 Given this fact, it is not so surprising that lawmakers in New Jersey and New York City are trying pass bills to prevent stores from going cashless.

As an article on The Motley Fool website points out, New Jersey politicians are trying to prevent cashless stores because not accepting cash can prevent certain groups of people from making a purchase. This is the same argument that was made in The New York Times article mentioned earlier.

According to The Motley Fool article, Massachusetts is currently the only state that requires brick-and-mortar stores to accept cash.

Is Cashless Bad for the Brand?

While it’s estimated that only 31 percent of consumer transactions are cash, not offering cash as an option can create hassles beyond the bad PR it is getting for creating barriers for the unbanked.

Finding out that they can’t use cash until it is time to pay can be a source of frustration for some customers.

Even customers who rarely use cash can find it frustrating when they are asked to use a credit card to pay for a last-minute addition such as mayonnaise or another condiment at restaurants or even small items at a retail store. 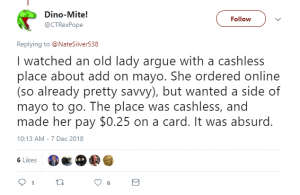 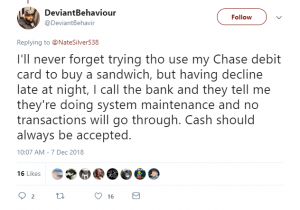 Given that customers can and often do vent their frustration publicly on social media, going cashless might be more trouble than it’s worth.

With this in mind, it is fairly easy to see why Jeff Hasen often reinforces the fact that cash isn’t going anywhere, at least in the near future.

It is also not surprising that some merchants that tried to go cashless have decided to change their minds. 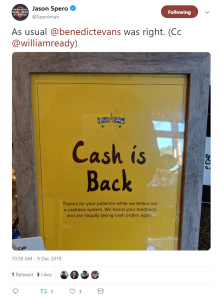 However, as the author of the post on The Motley Fool website points out, while going cashless might not the best way to go now, stores will never know whether it is a good idea to go cashless in the future if they aren’t even allowed to try.

It does seem like there might be some easy workarounds that stores or restaurants could offer if they do want to go cashless at the checkout line. The most obvious would be making an ATM or vending machine available to customers that would give them the option of buying prepaid debit cards.

This would give customers access to the store, while still encouraging them to pay via other payment options.

I’m not sure if this would satisfy lawmakers in Massachusetts, New Jersey, New York City, or any other place that makes going cashless illegal.

If you know the answer to that legal question or if you have any other comments or suggestions, please feel free to comment below.