Charity Runner: The Beginning of a Fundraising Journey 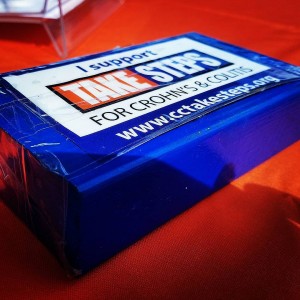 Note: This post deviates from the regular voice of this blog. It is meant to document the beginning of my fundraising efforts for the Crohn’s and Colitis Foundation. I am posting it because it will give some context to future posts. It also lets readers know where else they can find me on the Internet.

This year is my fifth year serving on the event planning committee for the Twin Cities Take Steps Walk, a fundraiser that benefits the Crohn’s and Colitis Foundation.

As their website points out, “Take Steps for Crohn’s & Colitis is the Foundation’s largest fundraising event of local community walks dedicated to raising funds to find cures for Crohn’s disease and ulcerative colitis. Participants and teams raise funds throughout the year and come together at the Take Steps walk event to celebrate their fundraising achievements!”

As part of the event planning committee, I help plan one of the Take Steps walks to help others raise money for this important cause. However, I never actually took part in the fundraising efforts. That is, until this year.

From Crohn’s Patient to Charity Runner

I chose to help with the Crohn’s and Colitis Foundation Take Steps Walk because I was diagnosed with Crohn’s Disease in 1995 while attending the University of Wisconsin-Madison.

Without getting into all the details, I can say that I was able to keep the disease in check for nearly two decades with the help of medication.

However, in September of 2013 I was told that I would have to have surgery as a result of complications that were caused by the disease.

In the months that followed, I decided that it was time to try to increase my fitness to prepare for the surgery.

This is part of the reason that I started running in the summer of 2014.

In fact, at the time, I decided that if I was going to take up running, I would gradually train myself to run the full 26.2 miles to complete a marathon.

Then, just before my 43rd birthday, I called up the Crohn’s and Colitis Foundation to say that I was ready to raise money as a Team Challenge charity runner in the 2017 Chicago Marathon. (Team Challenge is similar to Take Steps, but participants run instead of walk.)

In an effort to document my training for the marathon, I started a sideblog on Tumblr (charityrunner.tumblr.com) and a YouTube channel (Charity Runner).

You can also connect on mapmyrun.com.

I am also going to be posting on my Snapchat, Instagram, and Twitter accounts. I am @chadjthiele on all three of these social networking sites. (Note: I try to keep my Twitter focused on marketing, but I post running updates every once in a while.)

And, of course, there is the fundraising page on the Crohn’s and Colitis Foundation website.

As I mentioned, I have helped other people raise money for the Crohn’s and Colitis Foundation for a few years. However, I didn’t take part in the actual fundraising efforts.

That was, until this year.

At the end of the journey, I plan to document some of the things that I learn along the way. (For example, company matching donations are awesome!)

Until then, please follow me on the social networking sites that I mentioned above and donate!