You Might Not Look at a Mirror the Same Way Again 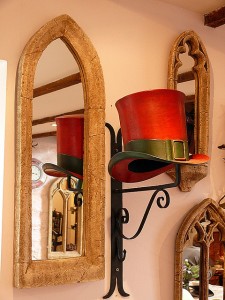 In the retail environment, it is common to see a mirror or two located near items that are for sale.

However, the reason for the location of these mirrors might not be as obvious as you might expect.

Having a mirror handy will help customers visualize whether or not an item goes with another item or even if the clothes that they try on fit in all the important places.

However, mirrors also serve several other important functions in retail.

Mirrors Make Us Act in a More Socially Desirable Way

In his book, titled “Brainfluence: 100 Ways to Persuade and Convince Consumers with Neuromarketing,” Roger Dooley points out that, “When we look in a mirror, our behavior is actually altered – at least for a short period of time.”

“The most venerable piece of mirror-behavior research dates all the way back to the 1970s,” continues Dooley. “Like many experiments in social psychology, the setup was simple: children making their Halloween rounds were told they could take one piece of candy from a large bowl of candy and were then left alone. About 34 percent helped themselves to more than one piece. When a mirror was placed behind the bowl so that the children could see themselves as they took the candy, only 9 percent disobeyed their instructions. The simple addition of the mirror cut the rate of bad behavior by almost three-fourths.”

Dooley continues by pointing out, “And it’s not just kids who respond to seeing themselves. Another experiment showed subjects either a live video of themselves (rather like a mirror except for the image reversal part) or neutral geometric shapes. They were then given a small task that required them to exit the room with a used paper towel. Almost half of the subjects who saw the neutral images littered by dropping the used towel in an empty stairwell, whereas only one quarter of those who saw themselves did so.”

The research indicates that seeing their image causes people to think about their behavior and ultimately behave in a more socially desirable way. In fact, influence and persuasion expert Dr. Robert Cialdini suggests that mirrors could be an inexpensive way to cut shoplifting and employee theft.

Mirrors Influence How We Shop

Paco Underhill, founder and CEO of Envirosell, also points out that mirrors are very important selling tools for retailers.

In his book, “Why We Buy: The Science of Shopping—Updated and Revised for the Internet, the Global Consumer, and Beyond,” Underhill points out that, “People slow down when they see reflective surfaces.”

Underhill continues, “Stand and watch what happens at any reflective surface. We preen like chimps, men and women alike. Self interest is a basic part of our species. From shopping to cosmetic surgery, we care about how we look. As we’ve said, mirrors slow shoppers in their tracks, a very good thing for whatever merchandise happens to be in the vicinity. But even around wearable items such as clothing, jewelry and cosmetics, where mirrors are crucial sales tools, stores fail to provide enough of them.”

On the other hand, he warns not to have too many mirrors. As he mentions, “A store shouldn’t feel like a funhouse. At a certain point, all that glass becomes disorienting.”

Mirrors are important sales tools for retailers. Not only do they help people visualize how an item will look on them before they make the purchase, but strategically placed mirrors might also be an effective way to reduce theft by shoppers and employees, alike.

Furthermore, people slow down when they see a reflective surface. Therefore, mirrors can be used by retailers to help call attention to items that are located nearby.

Finally, while many stores don’t provide customers with enough mirrors, providing too many mirrors can also be a problem.

This is something to think about the next time that you are walking through a department store and see your reflection in a strategically placed mirror.