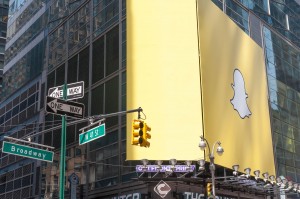 For a while now, marketers have debated about whether or not it is a good idea to use Snapchat to market a brand’s products or services.

However, in recent months, the app that is known for its disappearing content seems to have more vocal fans than detractors.

At the very least, more brands are experimenting with it.

The obvious reason for this is the fact that more and more people have started using the app.

In fact, according to a post on the comScore blog written by Adam Lella, “Snapchat isn’t just for teens and college-age adults anymore. While still wildly popular among these younger demographic segments, the ephemeral photo and video sharing app is also rapidly growing its user base among older Millennials (Age 25-34) and those 35 years-and-older. Three years ago, Snapchat’s app was only being used by 5% of smartphone users age 25-34 and 2% of users age 35+, according to comScore Mobile Metrix. Today its penetration among these two age demos is an impressive 38% and 14%, respectively.”

What is maybe more impressive is the fact that 69% of smartphone users age 18-24 use Snapchat.

“Snapchat’s growth has likely been fueled by the introduction of several popular product features over the past few years, which amplified its already powerful network effects,” the author of the comScore post explains. “Most notable among those new product features was the launch of “Stories”, which allows a user’s “snaps” (i.e. photos or videos) to be viewed in a chronological order by their friends an unlimited number of times in a 24-hour period. The Stories feed also includes coverage of various live events or places, in which some of the best snaps from users engaging with that showcased event are curated into one story available to all users. And more recently, Snapchat began regularly adding innovative ways to express oneself, such as “Lenses,” the camera’s creative filter options which make simple photos and videos more fun and entertaining.”

Knowing this, many marketers have started looking for ways to leverage the new Snapchat features to reach all of the customers and potential customers who use the app.

For businesses that are thinking about using Snapchat, here are a few things to consider.

As Adam Lella pointed out in the comScore post, the fact that Snapchat gives users the option to make their content more fun by providing lenses and geofilters has helped fuel the growth of the app.

While similar, there is a slight difference between a Snapchat lens and a geofilter.

Lenses give users the ability to add real-time special effects and sounds to the user’s Snaps.

By now, you have probably seen the rainbows coming out of a person’s mouth or a person’s face morphed into a zombie. (President Obama used the zombie Snapchat lens in his 2016 White House correspondent’s dinner video.)

Several large brands have also used sponsored lenses to increase awareness of their products or services.

In fact, earlier this year, Taco Bell launched a sponsored lens to celebrate Cinco de Mayo that resulted in 224 million views in one day. According to Adweek, this “shattered a Snapchat record.”

According to the New York Times, a Snapchat lens like this could cost between $450,000 to $750,000. This puts sponsoring a lens out of reach for many businesses.

However, that doesn’t mean that smaller brands can’t get in on the fun.

Snapchat also has geofilters that businesses can purchase for considerably less.

Geofilters are basically digital graphics that can be put over the user’s Snaps to make the current photos or videos more interesting.

In addition to the free community geofilters and the filters that can add various stats like time, temperature, or the speed that a person is going, Snapchat also offers on-demand geofilters that can be purchased by businesses or even users themselves.

The Personal Geofilter can be used to promote weddings, parties, birthdays, graduations, or just about any other event that is tied to a physical location.

A Business Geofilter can be used to help promote sales or any other event that is taking place at the business.

According to a LA Times article, these geofilters can be purchased for as little as $5 depending on when and how large of an area you want to include.

This inexpensive price makes it possible for local bars and restaurants to experiment a little.

As mentioned in the comScore article, the other feature that has helped fuel Snapchat’s growth is the introduction of Snapchat Stories.

Again, the Snapchat Stories feature lets friends view a user’s Snaps an unlimited number of times within a 24-hour period.

A lot of brands are using Snapchat Stories to give users a behind the scenes look at the business, offer an all-access view of an event, offer surprise coupons and discounts, or create an interesting story that connects with customers.

For example, Red Bull often lets influencers take over their account in order to let users see what it is like to live and compete in some of the extreme sports that fit the brand’s image.

Other brands like Express are using Snapchat to highlight some of the items that they have for sale and then ask for engagement with the brand. They then acknowledging those who do respond, which is a great way to make customers feel valued.

These are just a few suggestions. There are many different case studies to be found on the Internet.

Also, you need to understand that any brand can create Snapchat Stories, and these shouldn’t be confused with the content provided on Snapchat Discover.

Not Everyone Is a Fan of Snapchat

I started this post off by mentioning that there has been a debate going on about whether or not brands should invest in Snapchat.

And, while a lot of brands have started to at least experiment with Snapchat, others think that it is a waste of time. These people often list measurement issues among their largest concerns.

In a Forbes article, Mark Fidelman explains the concerns that he has with Snapchat.

Many of his complaints are similar to others I’ve heard before.

However, the one point that he makes that really hits home with me is the fact that when a person sees your content on Snapchat, there is no way to send them to your website or blog using a clickable link. This not only makes it difficult to drive sales, it also makes it difficult to attribute a conversion to Snapchat. And, the fact that there aren’t any links from the app means that your efforts won’t help with SEO at all.

There are definitely issues that make it difficult for some businesses to justify investing in Snapchat to market their products or services.

However, given the fact that a lot of people have started using the app, it might make sense to invest at least a part of your marketing spend on the app.

If done right, using Snapchat can be a fun way to connect with your current and potential customers.

In my opinion, this is an app that I would keep an eye on and try a few things, but it is not a place that I would invest a lot of time in. At least not now.

That said, I also don’t think that Snapchat is going disappear anytime soon.

It is just somewhat difficult for businesses to use Snapchat to market their products and services. And, it’s even more difficult to measure the results of these efforts.

This, however, might be part of the reason why so many people have started using Snapchat.