A Few Ways to Use Pokémon Go, Ingress, and Other AR Games to Promote Your Business 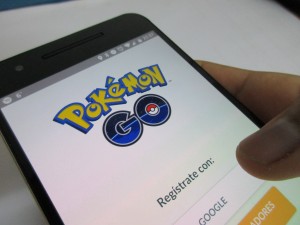 By now, you have probably heard about the new location-based augmented reality (AR) game from Niantic.

According to USA Today, “The mobile game Pokémon Go topped 15 million downloads on Apple’s App Store and Google Play, according to estimates from research firm SensorTower.”

“Pokémon Go is also among the most heavily used apps on a daily basis since its launch,” the article continues. “According to iOS usage data from Monday, users spent an average of 33 minutes a day playing the game. By comparison, the average iOS user spent 22 minutes on Facebook and 18 minutes on Snapchat.”

The article also points out that according to data from SurveyMonkey, as of July 11, Pokémon Go has 21 million daily active users in the United States alone.

As the game expands to other countries, the numbers of Pokémon Go players should continue to skyrocket.

With this in mind, businesses might be looking for ways to cash-in on the Pokémon Go craze.

For those businesses, here are a few suggestions.

As several business news sites have pointed out, Pokémon Go is a location-based game that will drive potential customers to local businesses.

As a Forbes article suggests, business owners should check out the game to see if their business doubles as a Pokémon gym or Pokéstop.

If so, it could create a Pokémon-inspired drink or dish or offer discounts to customers who are playing Pokémon Go.

Knowing this, some businesses might be wondering how they can be included in the game.

At this time, it appears that a business can’t request to become a Pokéstop or Pokémon gym.

This is because they are currently being created based on data collected from Niantic’s other popular augmented reality game, Ingress. (Note: A Wall Street Journal article mentioned that the idea of a business paying to become a Pokéstop or Pokémon gym to increase foot traffic will be an option in the future.)

Those of you who are familiar with Ingress know that many of the portals used to in the game are actually places submitted by users and approved by Niantic. In order to be approved, the places needed to fit a specific set of criteria. In particular, Niantic was looking for locations with a cool story, places with a historical significance or educational value, cool pieces of art or architecture, hidden gems or hyper-local spots of interest to the community, public libraries, and public places of worship.

As Derek Walter points out in a post on Greenbot.com, you can use the Ingress Intel Map to help locate Ingress portals, Pokéstops, and Pokémon gyms.

If your business is lucky enough to have a Pokéstop nearby, you can help get increased foot traffic by purchasing an in-game item call a “Lure Module”. This will help attract Pokémon to the Pokéstop. And, where there are Pokémon, the Pokémon Trainers (i.e., potential customers) will inevitably go.

A recent Bloomberg article pointed out that L’inizio’s Pizza Bar in Queens was one of the first businesses to give it a try.

“Food and drink sales spiked by about 30 percent compared with a typical weekend, according to pizzeria manager Sean Benedetti,” the article reports. “It was part luck—the game chooses which public locations to imbue with special significance in its virtual world—but there was also savvy strategy. Benedetti, 29, spent about $10 on “Lure Modules,” an in-game purchase that attracts Pokémon to a specified location. Players soon picked up on the fact that L’inizio’s was well worth visiting. “People are coming out of the woodwork because of this game,” he said.”

The Bloomberg article also points out that while the quest to find Pokémon might increase foot traffic, it doesn’t always translate into increased sales.

However, I would guess that the locations that haven’t seen an increase in sales might benefit by offering a special or discount to entice people to become paying customers.

Ingress currently has a series of free events that allow players to gather and compete with other local and visiting players.

While I am not sure if it is possible to become an official sponsor of these events, if your business is located near one, it would be a smart idea to offer discounts to players who would need to refuel along the way.

There hasn’t been any mention of similar Pokémon Go events. However, given the immediate popularity of the game I would be willing to bet that there will be some in the near future.

Become Part of the Game

Actually becoming part of the game is a possibility.

Anyone who has played Ingress is familiar with the sponsored items that enhance in-game play.

While experts are already warning that adding too much advertising could ruin the in-game experience in Pokémon Go, sponsorships and other in-game advertising are a possibility. However, sponsorships are probably going to cost more than many businesses have in their budget, particularly if Pokémon Go continues to grow in popularity.

Either way, businesses should probably keep an eye open for sponsorships and other in-game advertising opportunities.

I definitely see the possibilities that are created by Pokémon Go, particularly because of its appeal to a wide range of people.

The suggestions that I included in this post are just some of the things that businesses can do to leverage the interest that people have shown in Pokémon Go.

If the game has staying power, it will not only be good news for Niantic and The Pokémon Company, but it will also be good news for companies that plan to release other AR games in the future.

Furthermore, it will also be another way for business owners to use mobile phones to get new and existing customers to visit their businesses.

Now, I need to go find me some Pokémon.