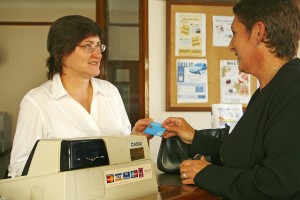 While the estimates vary by source, the fact is retailers lose a lot of money each year as a result of theft.

According to one source, United States retailers are losing $60 billion a year due to shrinkage. That is billion with a “B”.

This estimate was cited in a Forbes article and was based the US Retail Fraud Survey – 2015 from Retail Knowledge. According to this report, employee theft is the biggest problem. However, non-employee theft also contributes to the overall figure.

As many retailers are already aware, thieves are walking through their doors each and every day.

Knowing this, retailers need to find ways to mitigate their losses while maintaining a welcoming atmosphere for honest, law-abiding customers.

While not a comprehensive list, a few of the specific suggestions that experts provide are listed below.

Welcome to the Store – The Importance of a Store Greeter

It is not surprising that the first suggestion listed in the Forbes article mentioned above is to have an employee greet customers as they enter the store.

This is a practice that is common in many retail stores.

According to the authors of the Introduction to Criminal Justice: A Balanced Approach, “Retail security experts have noted that this person is not just a greeter. He or she is in a position to prevent shoplifting. In particular, it is believed that the greeter sends a message to shoppers that they have been recognized and that if they think about stealing, someone has seen them in the store.”

With this in mind, it is not surprising that Walmart is bringing back greeters to combat their shrinkage problems.

Customer Service as a Way to Reduce Theft

As pointed out on Wikipedia, “The vast majority of thieves have one thing in common, they will steal only if they have the opportunity. So theft prevention is fairly easy. Constant and great customer service will eliminate most opportunity to steal.”

“80% of customers who steal merchandise are opportunists and do not walk in to the store with the intent to steal,” the contributor to Wikipedia states. “They find that one thing they did not expect to find, cannot afford to pay for it, and will steal it if they have the opportunity.”

As I pointed out in a post back in 2012, “Mirrors are important sales tools for retailers. Not only do they help people visualize how an item will look on them before they make the purchase, but strategically placed mirrors might also be an effective way to reduce theft by shoppers and employees, alike.”

In the post, I cited information found in Brainfluence: 100 Ways to Persuade and Convince Consumers with Neuromarketing by Roger Dooley.

“When we look in a mirror, our behavior is actually altered – at least for a short period of time,” writes Dooley in the book.

Dooley supports this statement with past research that suggests that by seeing their own image, people are more likely to think about their behavior and act in a more socially desirable way.

In the Forbes article mentioned above, Paul Hunter, President and CEO of Sterling Payment Technologies, gives some tips to reduce credit card and debit card fraud.

“Be sure to check that the customer’s signature on the receipt matches the signature on the back of their card,” Hunter is quoted as saying. “This will verify that the cardholder is, in fact, the card owner. If there is no signature on their card, ask for ID. Additionally, ask for a customer’s ID if the amount of the transaction is larger than your average transaction size. This policy has already been implemented at many of our nation’s largest retailers. You should also implement payment solutions that include ‘point-to-point’ encryption in addition to EMV. Point-to-point encryption further reduces the possibility that card numbers can be determined if a transaction request is intercepted. Finally, when a customer’s card is processed through the card reader, make sure that last four digits of the card number that print on the receipt match the last four digits embossed on the front of the card. Some POS systems will prompt the cashier to re-enter those digits from the card to make sure they agree with the value obtained from the card reader.”

Theft is a huge problem for retailers in the United States.

Therefore, no matter whether they are large or small, retailers need to find ways to mitigate their losses while providing a shopping environment that is welcoming to their law-abiding customers.

There are some basic things that retailers can do to reduce theft.

As the examples listed in this post show, some of the most important things that retailers can do involve having employees available who provide great customer service.

This will not only help reduce shrinkage, but should also help the retailer achieve some of the other goals that they have, including the most important, selling more products.