Added to the Watch List: Dynamic Pricing in Brick-and-Mortar Stores 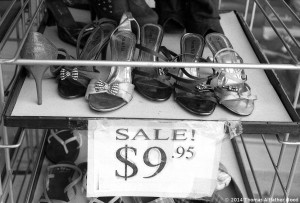 Price, along with product, promotion, and place is one of the parts of marketing that E. Jerome McCarthy included on the list of four P’s that he used when he expanded on what Neil Borden coined as the “Marketing Mix.”

While it is a very important part of marketing, price is something that I just haven’t focused on.

However, a recent article written by Bryan Eisenberg has me extremely intrigued.

In the post, Eisenberg recommends that brick-and-mortar retailers find ways to innovate or be left behind.

But, it was one paragraph, in particular, that really got me thinking.

“Omni-channel retail needs new leaders with an entrepreneur’s vision to thrive amongst the chaos and jump ahead of the curve,” writes Eisenberg. “We need bold experimentation in the brick & mortar channel. It’s not enough to give your associates mobile devices to enable checkout from anywhere in the store. Apple has been doing that for years. Take a look at what jewelry retailer Blue Nile has done at first with their test kiosks and now with their first successful brick-and-mortar “web room.”  Have you seen Amazon’s first store? There are no prices on the shelves. They’ll leverage people’s own devices to offer dynamic pricing. Will you?”

It was the last part that jumped out at me.

While it might not seem like much to some people, if other stores follow Amazon’s lead, I think that we can look forward to some huge changes in how retailers price their products and services in order to compete with the stores around the corner and the ones customers have access to via their computers and mobile devices.

According to Wikipedia, “Dynamic pricing, also referred to as surge pricing or demand pricing, is a pricing strategy in which businesses set flexible prices for products or services based on current market demands. Business are able to change prices based on algorithms that take into account competitor pricing, supply and demand, and other external factors in the market.”

“The concept of dynamic pricing has been around for many years, particularly in the airline and hotel industries, but retail is one of the newer industries to adopt this pricing strategy, and it’s growing rapidly,” the Wikipedia page points out. “Many believe dynamic pricing will become more relevant in the future of ecommerce.”

A 2012 Wall Street Journal article also points out some of the factors that online retailers use when setting prices online.

“It is difficult for online shoppers to know why, or even if, they are being offered different deals from other people,” the authors of the Wall Street Journal article write. “Many sites switch prices at lightning speed in response to competitors’ offerings and other factors, a practice known as “dynamic pricing.” Other sites test different prices but do so without regard to the buyer’s characteristics.”

In the example listed in the article, Staples.com used the distance that a person was located from a competitor’s brick-and-mortar store as one of the factors it used to adjust the prices for the items it sold online.

However, this is the online store where prices can be changed with only a few clicks.

Before smartphones, this type of change would have been extremely difficult in brick-and-mortar stores.

Sure, most retail stores have sales that change the prices of the items that they sell, maybe even daily.

But, the smartphone and the data that retailers now have can give them the ability to target customers and change prices with a much faster turnaround time, possibly even in real time.

This could be a game changer.

As I mentioned earlier, pricing strategy is not my area of expertise.

So, there isn’t much more that I can add to the discussion.

That said, it is easy to recognize that having the ability to determine if price will have an effect on a sale and make a price adjustment when a customer is most likely to buy from the store (i.e., when they are actually in the brick-and-mortar store) can and will have a huge impact on sales.

That’s why I plan to watch what retailers do and monitor advancements in the technologies that they use to adjust prices that they offer to customers online and in brick-and-mortar stores using the data collected from customers’ smartphones.

And, it is probably a good idea if retailers do the same.