A Huge Social Media Fail—Or Is It?

In the short history of social media marketing we have seen a lot of brands post things on the Internet with the hope that the content would resonate with consumers only to have it backfire.

In May, BuzzFeed posted an article, titled “19 Companies That Made Huge Social Media Fails.”

The list includes many examples that leave you shaking your head and saying to yourself, “What were they thinking?”

Now, let’s face it, it is very tempting for brands to join the conversation when news breaks in order to gain exposure for their brand with very little time or effort involved.

If the event is positive or lighthearted in nature, then joining the conversation is just good business. (Oreo showed how to do it right earlier this year after the lights went out at the Superdome during the Super Bowl.)

As Mike Mikho suggests, even negative events that involve celebrities can be fair game. (I’d add that this is true only if no one is seriously injured.)

However, if consumers’ conversations are focused on tragic events (e.g., terrorist attacks, school shootings, natural disasters, plane crashes, etc.,) then joining the conversation might not be the best thing to do. Saying the wrong thing at the wrong time can create a huge headache for your brand.

In my opinion, the best thing brands can do to when a tragedy happens is to remain silent for a while. (And, yes, this means delaying those automated posts that were planned in advance.)

If you feel that a comment is required, pay your respects to the victims or find ways to be helpful without being self-promotional. This is a good rule to follow if your brand doesn’t want to find itself on a list similar to the one BuzzFeed posted.

Some Rules Are Meant To Be Broken

Having a lot of people criticize your brand for saying something insensitive is generally not a good thing. And, showing up on a social media fail list probably isn’t going to help generate sales.

That is, unless you’re Kenneth Cole. 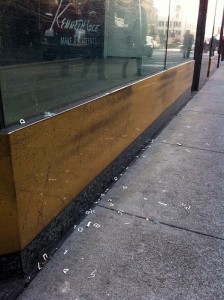 If you go back to the BuzzFeed list, you will see that Kenneth Cole was number 1. Kenneth Cole earned a spot on the list by making light of the protests in Egypt in 2011 by posting this on Twitter: “Millions are in uproar in #Cairo. Rumor is they heard our new spring collection is now available online at http://bit.ly/KCairo -KC”

The tweet created its own uproar—this time on the Internet. (This was exacerbated when pranksters added the tweet to the window on the Kenneth Cole store in San Francisco.)

According to CNN, Kenneth Cole apologized within an hour of posting the tweet. Cole is quoted as saying, “We weren’t intending to make light of a serious situation. We understand the sensitivity of this historical moment.”

Cole then posted on his official Facebook page, “I apologize to everyone who was offended by my insensitive tweet about the situation in Egypt. I’ve dedicated my life to raising awareness about serious issues, and in hindsight my attempt at humor regarding a nation liberating themselves against oppression was poorly timed and absolutely inappropriate.”

However, as it turns out, while the tweet may have been considered inappropriate by some consumers, it also was good for business.

In the October issue of Details, Cole is quoted as saying, “Billions of people read my inappropriate, self-promoting tweet, I got a lot of harsh responses, and we hired a crisis-management firm. If you look at lists of the biggest Twitter gaffes ever, we’re always one through five. But our stock went up that day, our e-commerce business was better, the business at every one of our stores improved, and I picked up 3,000 new followers on Twitter. So on what criteria is this a gaffe?”

Given this, it is not surprising that Cole used the same tactic again when he tweeted this about the Syrian crisis in September of this year, ““Boots on the ground” or not, let’s not forget about sandals, pumps and loafers. #Footwear”

Again, it had people criticizing Cole for being insensitive.

And, that is most likely what Cole wanted people to do.

Why It Works for Kenneth Cole

So, why does it appear that Kenneth Cole gets rewarded for saying something on social media that would have a negative effect on other brands?

Is it the type of product that he sells? Maybe.

Is it the type of consumer that he is selling to? Could be.

Is it because social media is a nonissue? I’d argue no, because the data he presents show that his shocking statements on social media actually generated business.

Could it be that we are trying to be too politically correct and Kenneth Cole’s customers are supporting someone who stands up and says screw conventional thinking and is willing to take a risk and make fun of a horrible situation? Could be, but I doubt it.

Is it that all press is good press? Maybe.

First, we need to remember that social media is just a vehicle for people to get their message out to the world.

Before social media, people were saying things that made other people criticize them. Kenneth Cole is no exception. In fact, Kenneth Cole Productions, Inc. is known for its controversial and sometimes tasteless advertising.

But, then again, others would point out that the controversy Kenneth Cole creates actually helps the business.

The reason for this is something that I can’t quite explain. It could be a combination of many different factors that can’t be controlled for.

What I can say for sure is that this tactic is only going to consistently work if the brand delivers a great product in the first place. And, there is where I think the real answer is. Kenneth Cole makes great clothes. So, therefore, Kenneth Cole Productions, Inc. might be able to get away with things that other brands can’t get away with.

In the end, I wouldn’t recommend using Kenneth Cole Productions, Inc. as a role model for your online communication strategy. That is, unless you can deliver great products on a consistent basis and are willing to respond to complaints from consumers who might not be so forgiving.