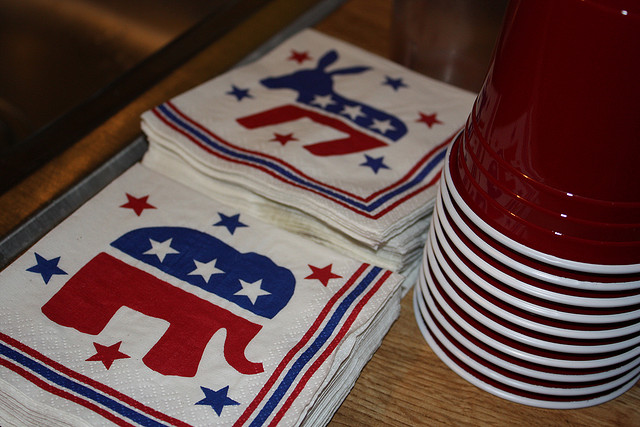 It’s an election year in the United States.

With that brings a lot of mudslinging from both sides of the aisle in an attempt to convince the American public to vote for one candidate over the other.

In some cases, political campaigns can get downright nasty.

In his book, titled “Ogilvy on Advertising,” (affiliate link) David Ogilvy writes that it is very difficult for companies to manipulate the public into buying their products, but the same doesn’t hold true for political campaign advertising.

According to Ogilvy, “One way or another, the odds against your being manipulated by advertising now are very long indeed. Even if I wanted to manipulate you, I wouldn’t know how to circumvent the legal regulations.”

However, he continues, “Hold your horses — I almost forgot. There is one category of advertising which is totally uncontrolled and flagrantly dishonest: the television commercials for candidates in Presidential elections.”

While the book was written in 1980s, it appears that the same still holds true today.

According to Wikipedia.org, “While there has been progress in regulating campaign finance, very little has been done in the way of regulating political advertising content. Candidates can and will display messages in their advertisements that come very close to propaganda. The Bipartisan Campaign Reform Act of 2002 addressed the issue of “soft money” or money contributed through political action committees, it raised the legal limits of hard money that could be raised for any candidate, and set limits on what funds could be spent on election broadcasts, but it did nothing to challenge the lack of truth in political campaign advertising. As of this time, there is no pending legislation addressing this issue.”

The point that I am making in this post is that when you receive information via a candidate’s campaign ads, don’t believe everything that you hear. It’s best to check with a trusted neutral third-party source, such as FactCheck.org, to verify that the information that you are getting is factual.

Keep in mind, I’m not trying to chastise one side or the other.

I believe that most Americans, whether they are Democrats, Republicans, Independents, or have some other political affiliation, basically all want the same things. We just disagree about how to get there.

In fact, on this day, what we really need to remember is that what makes America great is the fact that we are a melting pot of cultures from all over the world and that being an American means that we have the right to peacefully disagree.

In many cases, the fact that we can disagree and debate the issues often leads to the best solution.

We just need to remember that the arguments need to be based on facts, not hearsay or outright lies.