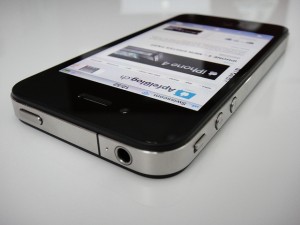 Apple reported sales figures on Tuesday that made a lot of investors very happy.

According to The New York Times, “The company reported Tuesday that soaring sales of the iPhone, especially in China, helped Apple nearly double its profit in the company’s fiscal second quarter.”

The article also reports, “Apple said it sold 35.1 million iPhones in the quarter, an 88 percent increase from the period a year ago.”

Smartphone Ownership in the United States

A recently released study that was conducted by Arbitron and Edison Research sheds light on mobile phone usage among Americans age 12 and older. (Note: The study was conducted from January 20, 2012 to February 19, 2012.)

At the time the study was conducted, 44% of Americans age 12 and older owned a smartphone, up 42% in just one year.

The Impact of Owning a Smartphone

I’d speculate that usage of mobile phones for various functions is higher among smartphone users than it is among non-smartphone cell phone users due, in part, to the fact that early adopters of smartphones would most likely also be early adopters of other technologies that utilize the features that can be accessed on a mobile device. The fact that it costs a lot more to own a smartphone also probably influences the way consumers use their mobile phones.

Of course, some of the differences can be explained by the fact that smartphones, by definition, allow users to do a lot more things with greater ease than non-smartphone cell phones do.

With that said, it’s not surprising that of the digital devices/platforms that were asked about in the study, Apple iPhones and Android smartphones were the most likely to have a big impact on people’s lives.

People Are Attached to Their Smartphones

The number of people who own smartphones continues to rise.

This is not surprising, given the fact that consumers can do so many cool things with their smartphones. So many things that many people who own smartphones report that these devices have had a big impact on the way that they live their life.

In fact, smartphones have become such an important part of the way that some Americans live their life that they always have their smartphone within reach.

Given the fact that so many consumers rely so heavily on their smartphones, don’t you think it sounds ridiculous for a company to say that investing in mobile marketing isn’t worth the effort?