Is There a Daily Deal Site for the Rest of Us? 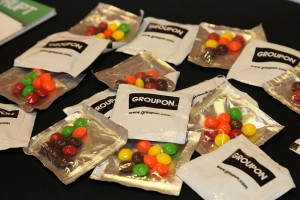 With the rapid advances in technology, savvy marketers are finding additional ways to advertise their products and services.

To help fill the need for additional marketing vehicles, smart tech startups are stepping up and creating interesting sites that are redefining the way consumers interact with businesses.

Some of these tech startups are helping connect businesses to their potential customers by creating daily deals sites.

The Geography of the Daily Deal

Many daily deals sites start off by offering their services in select major metropolitan areas and then expand to other major markets after they have created some buzz about the site.

The way that many daily deal sites are set up involves having a sales force on the ground in the markets that they serve who make sure that there is a new deal each day. The behind the scenes efforts to find local business that are willing to offer a deal to consumers would appear to make it cost prohibitive to expand beyond major metropolitan areas.

This makes it difficult for people in small and medium sized cities to participate in a major part of the tech revolution. And, people living in rural communities… forget about it.

The Daily Deal and the Small Business

The concept of connecting consumers to small businesses in major cities is a great idea.

However, the short-term exposure that small businesses get may not be worth the costs involved in offering this type of deal to consumers.

In fact, some people have questioned whether or not consumers who use daily deal sites will become repeat customers who are willing to pay full price in the future.

It has also been documented that some daily deal offers have been very detrimental to the small businesses that offered them.

With the increasing number of people who are purchasing smartphones all over the country, the time might be right for a startup to offer a national daily deal site to consumers.

What I am envisioning is a site that partners with major brands that have a presence all over the country. This could include restaurants, department stores and even individual products and services that are available at multiple retailers.

By eliminating the need for a local sales staff in each city it would allow the site to offer daily deals to smaller cities and even rural markets.

And, because the site would be working with major brands that are already offering similar deals via other advertising mediums, it would decrease the chance that the offers would have major negative impacts on their clients’ bottom lines.

I am aware that Foursquare and Shopkick are offering deals on a national level. And, I am a huge fan of both sites.

However, there are people out there who are reluctant to use location-based social networking sites similar to Foursquare. And, others might not be interested in a site with the gaming component that Shopkick introduces to the shopping experience, so they wouldn’t even think to use the app to find out if there are any deals currently being offered by a participating merchant.

In doing some research for this blog post, I was able to find additional deals sites with some potential, including The Dealmap and Eversave.com. However, while it does appear that both of these sites partner with some national brands, again it looks like they are limiting their offerings to select major cities.

The Valpak app comes the closest to what I am envisioning. However, their selection of deals is still rather limited, at least in the market where I am currently located. (Note: You can get additional deals at their website.)

Coupons.com is also worth looking into, but they don’t have an app.

Finally, many individual brands also have smartphone apps. However, I would speculate that the people who know about and currently use their apps tend to be current customers. To put it another way, having to use a different app for each store takes the recommendation component out of the equation.

As more people purchase smartphones, there is going to be an increased opportunity to reach more diverse subsets of the population.

However, people in some of the smaller markets currently aren’t able to participate in part of the technology revolution that is taking place in large metropolitan areas.

Daily deal sites are just one example of this.

While there might be some local websites that serve some of the smaller markets, to my knowledge, a large daily deal site hasn’t been created that has a goal of offering a daily deal to the everyone in the United States.

So, why hasn’t one of the current daily deal sites out there started offering a national daily deal, in addition to their more localized deals? With the name recognition that Groupon and LivingSocial already have coupled with the infrastructure that they already have in place, it shouldn’t be that hard for them to do.

And, for those of you with an entrepreneurial spirit, mixed with the right tech knowledge and business acumen, this might be a good idea for a new startup. Feel free to take the idea and make it your own… I would just like to see a daily deal site that could be used by the whole country.

If there is a site out there already doing this, please let me know about it in the comments section below.